Not Guilty Again! And Not Just Because of Hard Nosed GOP Partisan Politics 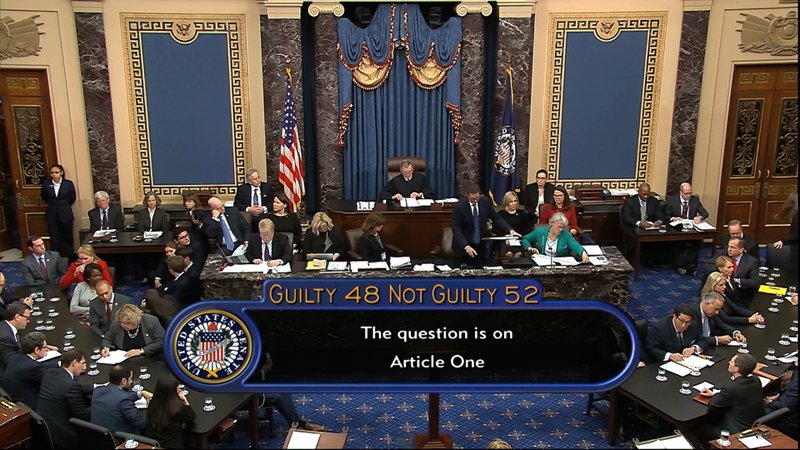 There is no surprise that most GOP senators say they are wary of convicting Trump. Their reluctance, really refusal to convict him, is routinely chalked up to naked, raw, hard-nosed partisan politics, with a heavy dose of fear. The fear is that Trump’s millions of backers and true believers will be so enraged at a conviction that they’ll punish GOP senators as “No Trump Republicans,” at the polls down the line.

The seeming defiance of their chief, Senate Minority Leader Mitch McConnell, in pushing back on any talk of conviction seems to seal the belief that it’s the GOP just being the same old obstructionist GOP. A GOP that must toe the line on a Trump conviction out of party loyalty, political largesse, and implacable opposition to the Democrats. The political optic of that was glaring when GOP senators and House representatives still railed long and loud against the second Trump impeachment. And except for a handful of GOP reps still said no to a second Trump impeachment.

The brute truth is that convicting a sitting president poses far too many dangers to the democratic process. McConnell gave some hint of that the first go-round on the Trump impeachment when he branded it “weaponizing impeachment.” This was a disingenuous complaint and an almost nonsensical argument then. It’s even more silly and nonsensical now, given all we know about Trump’s blatant illegal, dangerous, destructive borderline sedition when he exhorted the mob to rip up the Capitol to keep him in the Oval office.

The single article of impeachment against him is incitement to insurrection fits. Squarely within the guideline of what is an impeachable offense.  No other president in the nation’s history including Nixon has been as blatantly crime-prone as Trump.

However, it’s still the process itself and the potential and abuse of it that makes it almost impossible to convict a president, let alone a non-president. The GOP had absolute control of the Senate when Clinton was impeached in 1998. It did not convict. Ten GOP senators flatly said they wouldn’t vote for conviction. True, Clinton was a popular president, and some of the senators came from states that Clinton won. They took the inevitable glance over their shoulders at possible voter backlash for a conviction vote. However, the senators also made clear that the offenses simply didn’t warrant ousting a sitting president from office.

Almost nothing will. The Founding Fathers were deeply wary of ever having to take that drastic step with the nation’s top executive. They warned when wrangling over putting a mechanism in the Constitution for getting rid of a sitting president who abused the office of the extreme danger of using impeachment and conviction as a malicious weapon to cajole, threaten, intimidate, and ultimately remove a president of the opposing party they didn’t like, want, or had a vendetta against. If it happened, it would hopelessly taint the established process of getting rid of a bad or bad behaving chief executive, namely at the ballot box. Removal by anything other than an election, is extreme, and widely viewed as extra-legal.

GOP senators scream this at practically every turn. That impeachment is a political hit job by the Democrats on a President, who is not even the President anymore. Here’s where the fear of abuse of the process comes in. A conviction of non-President Trump could open wide the gates for going after any future sitting president that the opposing party deems to be a bad president. Since there is no allegation that Trump could be hauled into a court and charged with an actual crime this makes the reason for dumping him seem even more vague and hazy, and thus seemingly a political hatchet job by the Democrats. A future Democratic president could just easily find his or herself saber rattled with impeachment with the catch-all charges of abuse of power and Congress. Conviction sets that dubious precedent.

There’s no assurance that if the script were flipped and the Democrats had overwhelming control of the Senate that they could muster the two-thirds vote needed to convict. This is a high bar. In the Trump trial there’s absolutely no guarantee that all 50 Democratic senators will vote to convict him. A handful of Democratic senators could well vote not to convict him on the article of impeachment against him. The reasons are the same. Conviction brings the risk of jading the political process, stirring voter rage and cynicism, deepening political polarization, and the ease of waging political vendettas using threats of impeachment and conviction.

McConnell gives off mixed signals about the need for and outcome of a Trump Senate trial. But his heart won’t be in it, and not simply because the target is a former GOP president. No, conviction is just to explosive a minefield for most senators to fully tread through. Trump will be found not guilty. In part because of hard partisan politics. But in greater part for the same reason, Andrew Johnson, Bill Clinton, and Trump after his first impeachment weren’t convicted. Too many senators just see too much bad precedent in ousting a sitting president.

Earl Ofari Hutchinson is an author and political analyst. He is the author of the forthcoming What’s Right and Wrong with the Electoral College (Amazon Kindle) He is the host of the weekly Hutchinson Report on KPFK 90.7 FM Los Angeles and the Pacifica Network. His weekly political commentaries can be found at thehutchinsonreport.net