Foreshadowing the rise of the "Mega Church," "God's Man in Texas" revolves around a religious organization larger than the churches of Jerry Falwell or Robert Schuller, Pastor Gottschall is being pressured to retire, while an incoming "guest pastor" presumes he is being called in for a tryout at the coveted pulpit. Whether bringing souls to God or peddling Christianity as big business revenue, the love-hate relationship between the elderly pastor and his potential replacement examines the politics of religion and the ultimate questioning of one's faith.

Recorded before a live audience at the Skirball Cultural Center, Los Angeles in June of 2001. Directed by Brendon Fox 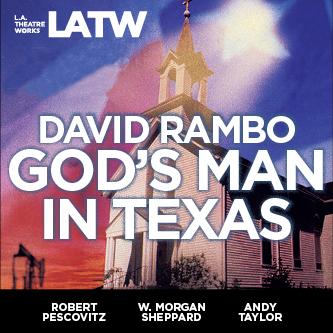