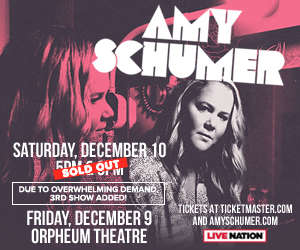 Amy Schumer is an Emmy-winning and Golden Globe-nominated standup comedian, actress, writer, producer and director.  Schumer is the creator, star, writer and executive producer of the award winning “Inside Amy Schumer,” the popular Comedy Central television series, which premiered in April 2013 to the network’s highest season premiere ratings of that year. “Inside Amy Schumer” won the 2015 Writers Guild Award for Best Comedy/Variety Sketch series.  In 2015, the show was honored with the first-ever Primetime Emmy Award for Outstanding Sketch Variety Series.  Schumer was also nominated for Outstanding Directing for a Variety Series and Outstanding Writing for a Variety Series. Schumer received honors for Individual Achievement in Comedy and Outstanding Achievement in Comedy from the Television Critics Association in 2015.  Additionally, she was awarded the 2015 Critics’ Choice Television Award for Best Actress in a Comedy Series.  Among the show’s many accolades, it also received the prestigious Peabody Award in 2014. In 2019, she was nominated for an Emmy in the Outstanding Writing For A Variety Special category for her comedy special “Amy Schumer Growing.”
http://amyschumer.com/
https://laorpheum.com/calendar/amy-schumer-whore-tour/

The event runs from 7:00pm to 10:30pm on the following dates.
Select a date to add this event to your calendar app.