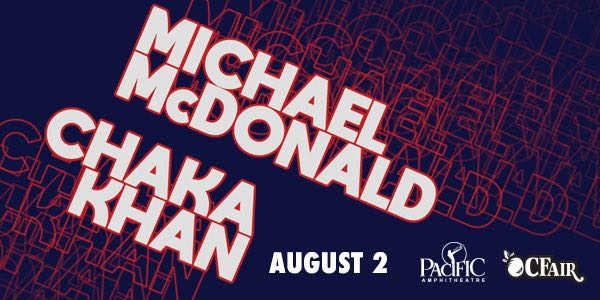 A prominent part in the soundtrack to our times, Michael McDonald, as an artist and songwriter, has been awarded an impressive five Grammys. McDonald’s matchless and prolific consistency through more than 40 years of recording and performing has resulted in a string of hits including “Sweet Freedom,” “Yah Mo Be There” (with James Ingram), and the Doobie Brothers classics “Takin’ It to the Streets” and “What a Fool Believes.” His latest release is 2017’s Wide Open.

Throughout her legendary career, Chaka Khan has won 10 Grammy awards, released 22 albums and racked up 10 #1 Billboard magazine charted songs, seven RIAA certified gold singles and 10 RIAA certified gold and platinum albums. Early on, she caught the attention of music icon Stevie Wonder, who penned her first smash hit with Rufus, “Tell Me Something Good.” The single from the group’s 1974 platinum-selling album, Rags to Rufus, earned Chaka her first Grammy Award.

In 1978, Chaka blazed onto the music scene as a solo artist with the release of the smash hit “I’m Every Woman” written by Ashford & Simpson. However, the song that made Chaka Khan a household name and propelled her to superstardom the world over was “I Feel For You,” written and first performed by Prince. Her latest release is Hello Happiness (out Feb. 15) featuring the hit single “Like Sugar.”

The event runs from 7:30pm to 11:30pm on the following dates.
Select a date to add this event to your calendar app.