The Invisible Pandemic: Care During COVID-19

Webinar with the Global Women’s Strike 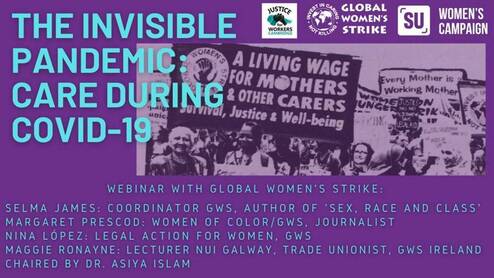 This Political Freshers’ Week, the Women’s Campaign, and Justice 4 Workers Cambridge have teamed up with Global Women’s Strike to discuss one of the most pressing issues of our current times: the crisis of care. COVID-19 could not have made it any clearer: the world would simply stop without the labor of caregivers. And yet despite the vital nature of this labor – providing the very foundations for life on earth – it remains grossly undervalued, both socially and economically.

GWS is an international network campaigning for a living wage for all caregivers, starting with mothers the first carers. Most recently, GWS has joined with the Green New Deal for Europe to launch the Care Income Now! The campaign, which urges governments all over the world to provide a Care Income that prioritizes and supports the work of all those who care for people, for the urban and rural environment, and for the natural world (find out more here)

Join us to get the chance to listen to and engage with some of the most influential feminist authors and activists from the past fifty years, including:

Selma James: renowned anti-capitalist feminist organizer and writer. She co-founded the International Wages for Housework Campaign in 1972, which had a path-breaking perspective in the women’s movement. She co-wrote the classic ‘The Power of Women and the Subversion of the Community’, which launched the ‘domestic labor debate’, one of the most influential debates in feminist thought. Her other pathbreaking work Sex, Race, and Class merged feminism and anti-racism. Almost fifty years on, she continues fighting for what she believes in as coordinator of GWS.

Margaret Prescod: originally from Barbados, Margaret worked alongside Selma in the 1970s, and co-founded International Black Women for Wages for Housework. In 1980 her book ‘Black Women: bringing it all back home’ on the experience of being an immigrant; the first on women and immigration. Based in Los Angeles, she is an award-winning journalist and coordinator of Women of Colour / GWS.

Nina López: originally from Argentina, Nina is the joint coordinator of GWS. She also co-founded Legal Action for Women, a grassroots legal service based at the Crossroads Women’s Centre, which now coordinates the Support Not Separation coalition to stop the State’s unjust removal of children from their mothers. She edited Some Mother’s Daughter: The Hidden Movement of Prostitute Women against Violence.

Maggie Ronayne: lecturer at NUI Galway campaigner for GWS Ireland, Maggie dedicates her time to other social justice struggles through her involvement in her university’s trade union, including against wage discrimination based on women’s caring responsibilities. Recently, she has been engaged in the massive struggle to ensure the safe re-opening of the University and the protection of all its essential workers.

Chaired by Asiya Islam: Cambridge sociologist specialized in issues of gender, class, and labor. Her research explores the lives of young women in urban India in the context of contemporary socio-economic change.

Accessibility information: We will be using Google Meets which allows Closed Captioning. You are welcome to attend with your mic or camera off. If there are any other accessibility requirements message the page.