Reflections on the 244th Birthday of the United States of America 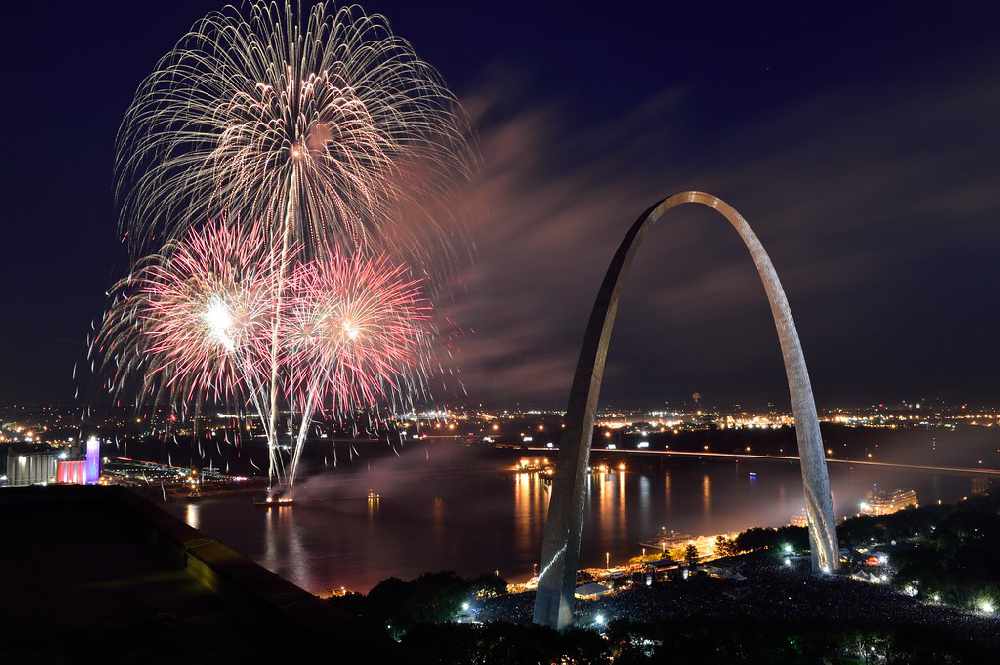 Forty-four years ago I sat among one million people under the Gateway Arch to watch a spectacular fireworks display over the Mississippi River in my hometown of St Louis, MO. The event was the culmination of an unprecedented two-year long national celebration leading up to that day, the American Bicentennial.

A few years later, when I was studying History in college, I began to see the extensive Bicentennial celebration in a different light. It looked more like a national re-education program. A brilliantly engineered, highly sophisticated advertisement/propaganda campaign designed to draw the General Public back into embracing the American Experience as truly righteous and benign in the wake of the cultural and political upheavals/revolutions of the 1960s, the murderous catastrophe of the Vietnam War, and a further loss-of-faith from Watergate and Nixon.

Nowadays, things have changed - or have they? We shall find out soon.

Six years from today, America will have another significant landmark birthday. 250 is not a centennial, but it's easy to make the case (since conventional arithmetic is done in Base 10) that 250 should be recognized as an even more notable anniversary than 200. On July 4, 2026 this Democratic Republic will have lasted a quarter of a millenium.

I do think that the general perception of the United States has shifted dramatically since 1976. There are some parallels: Trump as Nixon - a thought readily attended by everyone's favorite unthreatening quote by Marx "first as tragedy then as farce." Also, the keepers of the patriotic flame will inevitably seek to rekindle its glory and inoculate it against accusations of white supremacy (and, thus, against popular rebellions).

Nonetheless, the metaphors and narratives that dominated in 1976 - remember all of those Bicentennial minutes, with their dramatic tales of heroic Minutemen, interrupting regularly-scheduled advertisements on the boob tube - will certainly be challenged now.

Our "country tis of thee, sweet land of liberty" is now acknowledged by an increasingly large portion of the population as a project rife with cognitive dissonance - a Democratic Republic in which, even to this day, the votes of propertied white males have weighted significance (that's what you get when you combine voter purges with current campaign finance laws). Most significantly, tens of millions of our fellow citizens openly proclaim that American society is, in its essence, built upon genocide and human bondage.

Indeed. That unbelievable 630 foot high modernist sculpture, designed by the great architect Eero Saarinen, which I sat underneath on the banks of the Mississippi 44 years ago, was built as a monument to "westward expansion." One day in the early '80s when I was downtown with my father, and I was speaking appreciatively about the Arch, my father turned to me and said, "you understand it's a monument that celebrates genocide." I already knew enough history at the time to know he was right. I also knew it was a truth that St Louisans, or rather white St. Louisans, would not want to hear.

How will they feel about that message in 2026?

I think we're going to find out.

Having said all of this, I'm not one to throw the baby out with the bathwater; nor will I allow myself to be lumped into the "Bash America First" camp that Fox News and their ilk prattle on about.

I readily acknowledge that there have been no shortage of inspiring, truly progressive visions of America reborn - from Gettysburg to the March on Washington to Barack Obama's Yes We Can to Bernie Sanders - and, undoubtedly, there will be new reformulations by July 4 2026. The contemporary United States is, after all, the most diverse country in the history of the world - the promise and possibilities here remain unparalleled.

As such, in the coming weeks, I intend to address in this blog an age-old question on the American left: Is truly transformative change, the type we've needed throughout our history, possible in the U.S Constitutional system? While I acknowledge the record isn't promising; there remain strong arguments for why we should still fight inside the system for such change - though (spoiler alert), I will argue that any hope for meaningful progress in the near term will require significant supplementary direct action demonstrations.

For now, here are some closing thoughts about Independence Day 2020 through the prism of someone who embodies the promise, and whose art captures the complexities (dare I say dialectics), of American history - Bob Dylan.

I've always felt the opening verse of Jokerman, one of Bob Dylan's greatest song poems, speaks directly to the paradoxes present in America since its founding.

Standing on the water, casting your bread

Distant ships sailing into the mist

Freedom, just around the corner from you

But with truth so far off, what good can it do

Like so much of Dylan's best work, it's somehow both opaque and obvious; and as with his entire new album - Rough and Rowdy Days - in dialogue with America: a land of regenerative betrayal; always falling short of accounting for the sins of its past, yet never entirely losing sight of that possibility.

Jokerman's first stanza conjures so much. The Statue of Liberty as hope and false idol; America as a false God. Redemptive promise remains just out of reach in a country born from "redemptive" violence - where wisdom and honesty often have no value.

The song is from 1983, but is tied in my imagination to July 4, 1976 because of the parade of tall ships in New York Harbor that day - the Statue of Liberty front and center. That secularly sacred image of America as the land of immigrants is once again a source of contestation as the "nativist" white right-wing clings to power.

Back in '76, I couldn't have imagined we would be stuck in this rut 44 years later. Nixon had been banished two summers earlier, and though I was only ten I assumed we were headed for a more progressive future. It didn't go down that way... "but with Truth so far off what good can it do."

In the next six years, let's keep the momentum of the past five weeks going and bring the truth in closer - if we persist, we may yet overturn a history of broken promises, move past the forever-stalled present of promises deferred, to a new day of promise fulfilled.