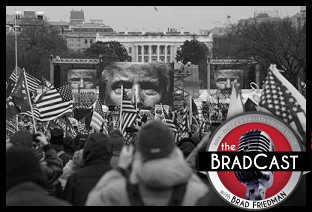 Way back in January, we reported on "How Trump Attempted to Use DoJ to Steal the Election". Why do our nation's corporate media outlets, all these months later, still have so much difficulty reporting it as such, despite the growing mountain of evidence on the unprecedented attempted theft of a Presidential election by a sitting U.S. President? That's just one of a number of stories and questions asked on today's BradCast. [Audio link to full show is posted below this summary.]

Among those many stories...

While we post The BradCast here every day, and you can hear it across all of our great affiliate stations and websites, to automagically get new episodes as soon as they're available sent right to your computer or personal device, subscribe for free at iTunes, Stitcher, TuneIn or our native RSS feed!