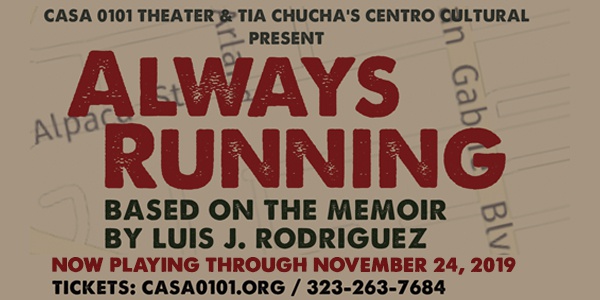 Several dates and times. Refer to the website for details.

CASA 0101 Theater and Tía Chucha’s Centro Cultural & Bookstore present the World Premiere of Always Running, based on the groundbreaking memoir written by, and adapted for the stage by, Luis J. Rodriguez.
A young man escapes his life of gang violence, discrimination, depression, and drug addition through art, the Chicano Movement, poetry and service.  Says Luis J. Rodriguez, “My book was about the transformative power of the arts as well as how the Chicano Movement provided me meaning and knowledge to join with the social justice struggles of the day. It dramatizes how a caring, persistent, and guiding mentor eventually gave me the consciousness and tools to own my life instead of turning it over constantly to drugs, crime, and violence.”  This production is made possible in part by the Eastside Arts Initiative. CASA 0101 Theater’s sponsors include: The California Endowment, the Los Angeles County Arts Commission, The Herb Alpert Foundation, The City of Los Angeles Cultural Affairs Department and The Ralph M. Parsons Foundation.

There will be Q&As and Booking Signings held with author and playwright, Luis J. Rodríguez after select Sunday matinee performances of ALWAYS RUNNING, including Sundays, September 1, 8, 15, 22 and October 6, 2019. Denise M. Sandoval, Ph.D., Professor of Chicana and Chicano Studies, California State University, Northridge, will moderate the Q&A on September 1, 2019. Josefina López, Founding Artistic Director of CASA 0101 Theater and a Producer of the show, will moderate the Q&As on September 8 and 22, 2019. At the conclusion of each Q&A session Luis J. Rodríguez will sign copies of his books “ALWAYS RUNNING: La Vida Loca: Gang Days in L.A.” and it’s sequel book, “It Calls You Back: An Odyssey Through Love, Addiction, Revolutions & Healing,” which will be available for purchase for $16 per book.

The event runs from 3:00pm to 11:00pm on the following dates.
Select a date to add this event to your calendar app.