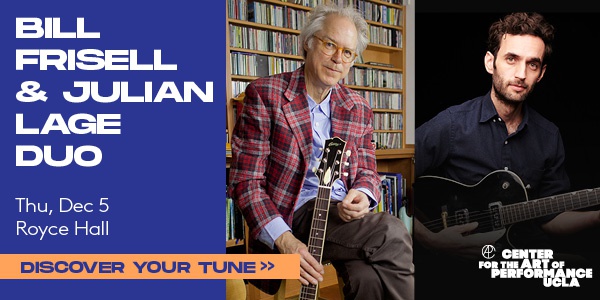 Described as being at “the very epicenter of modern American Music” by the BBC, Bill Frisell’s career as a guitarist and composer has spanned more than 40 years and 300 recordings, including 50 celebrated albums of his own. Frisell’s output spans a wide range of musical expression - from interpretations of classic film and TV music to his involvement in the early downtown NY music scene: from original film scores to arrangements for extended ensembles with horns and strings; from visionary solo recordings to collaborations with Nashville musicians and singer-songwriters; from a collection of traditional American folk songs to a John Lennon tribute and trio albums—one with jazz legends Dave Holland and Elvin Jones, the other with Ron Carter and Paul Motian.

Julian Lage is one of the most prodigious guitarists of his generation and has long displayed an ability to explore a wide range of sounds, ideas and genres since he first appeared with vibraphonist Gary Burton’s band at age 16. Since then, he has more than fulfilled the promise of his youth, collaborating with a diverse range of artists, including guitarist/singer Chris Eldridge of Punch Brothers, bassist Steve Swallow and the iconic avant-garde composer John Zorn; as well as with the house band on Live From Here; and composing for and fronting this own trio. This meeting of the minds of two guitar masters promises to be a night to remember.