CANDIDATE FORUM TO BE HELD IN LADERA HEIGHTS 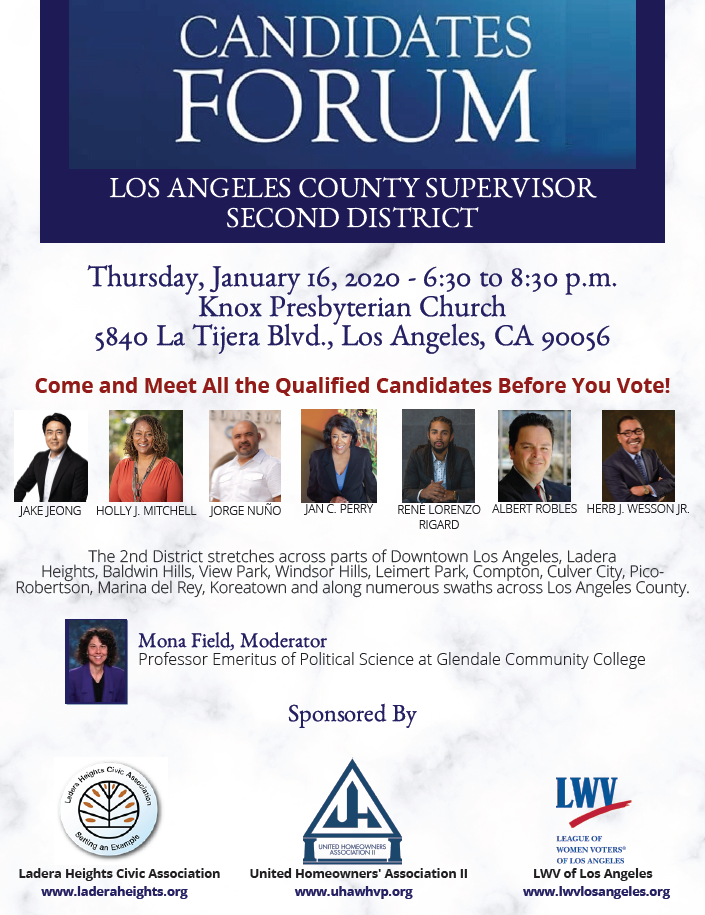 CANDIDATE FORUM TO BE HELD IN LADERA HEIGHTS

Candidates in the competitive race to succeed longtime L.A. County Supervisor Mark Ridley-Thomas — in a district that represents over two million residents currently include:

The forum will be moderated by Mona Field, League of Women Voters of Los Angeles co-president, author and former political science professor at Glendale Community College.

More about the Sponsors:

Ladera Heights Civic Association’s mission is to promote neighborliness, improve the quality of life and enhance property values in the community. www.laderaheights.org

UHA II represents the residents of unincorporated Windsor Hills, View Park, and View Heights and advocates on their behalf to improve the community’s social welfare, economy, and environment.

About the League of Women Voters

The League of Women Voters,  founded in 1920, currently celebrating its centennial, is a non-partisan political organization, encourages informed and active participation in government, works to increase understanding of major public policy issues, and influences public policy through education and advocacy. For more information or to find out about voter registration, visit www.lwvlosangeles.org or follow us on Twitter.

The event runs from 6:30pm to 8:30pm on the following dates.
Select a date to add this event to your calendar app.