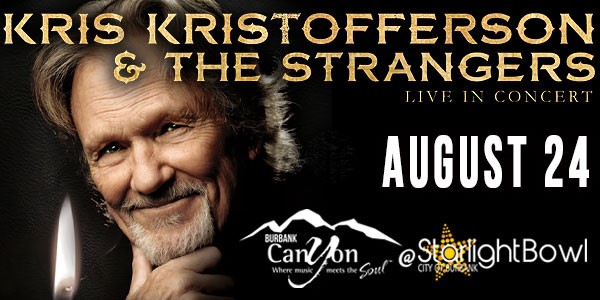 Kristofferson is a Country Music Hall of Famer who ranks among the most versatile of American talents. He’s been a Golden Gloves boxer, a Rhodes scholar, a college football player, an acclaimed actor, a military officer, a helicopter pilot, a Grammy-winner, and an icon.

Kristofferson achieved remarkable success as a country songwriter at the start of the 1970s. His songs “Me and Bobby McGee,” “Help Me Make It Through the Night,” “Sunday Morning Coming Down,” and “For the Good Times,” all chart-topping hits, helped redefine country songwriting. By 1987, it was estimated that more than 450 artists had recorded Kristofferson’s compositions.

His renown as a songwriter triggered Kristofferson’s successful career as a performer and that, in turn, brought him to the attention of Hollywood, leading to his flourishing career as a film actor. Kristofferson has acted in more than 70 films. In 1977 He won a Golden Globe for Best Actor in “A Star Is Born.” He’s appeared in cult favorites including the “Blade” trilogy, “Lone Star,” “A Soldier’s Daughter Never Cries,” “Alice Doesn’t Live Here Anymore,” “Blume In Love,” “Cisco Pike,” and “Pat Garrett and Billy the Kid.” Recent films include “Fast Food Nation,” “Dreamer: Inspired By A True Story,” “The Jacket,” “Silver City,” “He’s Just Not That In To You,” and “Dolphin Tale.”

Heralded as an artist’s artist, the three-time GRAMMY winner has recorded 27 albums, including three with pals Willie Nelson, Johnny Cash and Waylon Jennings as part of the Highwaymen. Kristofferson has spent three decades performing concerts all over the world.

The event runs from 5:30pm to 11:00pm on the following dates.
Select a date to add this event to your calendar app.