The Haden Triplets live at Zebulon 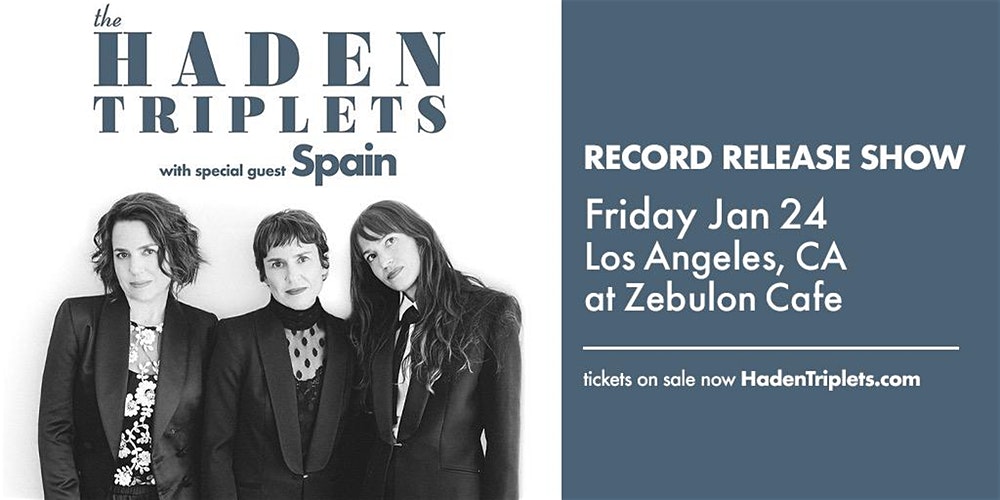 The Haden Triplets - Petra, Rachel and Tanya - were born in New York and raised in Los Angeles, and carry between them a list of credits that includes some of the most interesting rock, jazz and experimental music to come along in the past 30 years: that dog., Weezer, Beck, Foo Fighters, Green Day, Jimmy Eat World, Bill Frisell, Sunn O))), Mike Watt, Paul Motian, Silversun Pickups and the Decemberists, to name just a handful.

But like their late father, the bassist Charlie Haden, who changed jazz’s trajectory alongside Ornette Coleman beginning in the 1950s, the sisters also belong to the American heartland, and to the winsome family harmony singing of the region’s folk and country music. On The Family Songbook, the follow-up to their acclaimed 2014 self-titled debut, the Haden Triplets mine their heritage more profoundly than ever before. That includes recording recently unearthed songs by their grandfather, Carl E. Haden, a figure of novel-esque dimensions: friend to the Carter Family, Porter Wagoner and other icons, and patriarch of the singing Haden Family, a fascinating footnote in country-music history.

These uncovered gems are lost dispatches from a forgotten America—the mountains and prairies and swamps that conjured up the folk art and culture endlessly mythologized by everyone from Dylan to the Coen brothers. Carl wrote the four tunes here during the Depression, when he was still in his 20s and a rising popular radio performer.

But the concept behind the Triplets’ The Family Songbook also transcends ancestry and nostalgia. The project includes a contribution by the sisters’ brother Josh, a brilliant singer- songwriter best known as the force behind the genre-bending indie band Spain. The song, “Every Time I Try,” was included on the soundtrack to director Wim Wenders’ The End of Violence in 1997, and Josh returns to play bass behind his sisters here. Kanye West’s “Say You Will” might seem out of left field, but it fits the sisters’ m.o. to simply seek out great songs, and its stark, flamenco-tinged treatment makes it feel remarkably of a piece with Americana standards like “Wayfaring Stranger,” “I’ll Fly Away,” “Wildwood Flower” and “Pretty Baby.”

The Triplets recorded some demos a couple decades back that helped them firm up their rapport in roots music, but an album from father-and-daughters was a wish that kept getting kicked down the road. That aspiration was fulfilled in part in 2008, when Charlie Haden released Rambling Boy, an inspired celebration of his country roots featuring his daughters, Josh and a star-packed roster including Metheny, Rosanne Cash, Bruce Hornsby, Elvis Costello, Ricky Skaggs, Béla Fleck, Tanya’s husband, the actor and comedian Jack Black, and many others.

A couple years after Rambling Boy, the Haden Triplets portrayed the Fates on singer-songwriter Anaïs Mitchell’s folk-opera album Hadestown, a project also boasting three of the sisters’ arrangements. Early in 2014, the Triplets released their self-titled debut through Jack White’s Third Man Records, with production by Ry Cooder. Cooder’s enthusiasm, along with the Triplets’ gorgeously human, Carters-esque harmonies and Cooder’s expertly rustic guitar work, translated to rave reviews in outlets like the Los Angeles Times and the New York Times, who commented, “If their self-titled debut album seems like an overdue, common-sense inevitability, it also has the spark of an unexpected grace.”

The Triplets’ vocal chemistry is at once tradition-minded and modern; throughout, they demonstrate a dynamic, elastic quality that proves how hard they’re listening to one another. In the end their sound is as otherworldly as ever—evocative of both the old, weird America and a specific brand of vocal charm that anyone who’s minded indie-rock since the early ’90s will recognize.