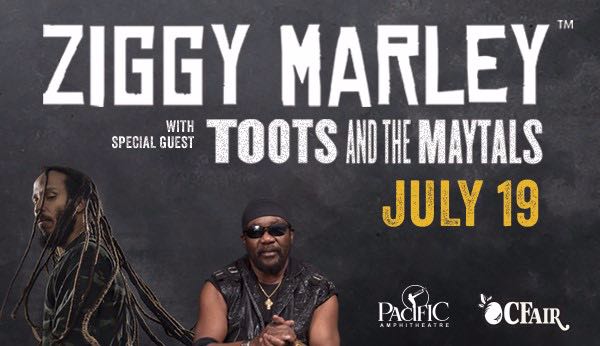 Ziggy Marley & Toots and the Maytals Live at Pacific Amphitheatre

The eldest Marley son is not one to let any moss grow under his feet. The eight-time Grammy® award-winning musician and reggae icon Ziggy Marley released his seventh full-length solo studio album, Rebellion Rises, in 2018. Fully written, recorded and produced by Marley, this passionate and indelible new collection of music encourages people to stand together in activism through love. Other releases include the Grammy award-winning albums Love Is My Religion, Ziggy Marley: In Concert and Fly Rasta.

Toots and The Maytals

Toots is one of the true architects of reggae, so much so that “Do the Reggay,” a 1968 single by Toots and his group, the Maytals, is credited with giving the genre its name. Classic songs, written and recorded by Toots and the Maytals, have been covered by the likes of The Clash and The Specials, and the group was featured in reggae’s greatest breakthrough event “The Harder They Come,” the 1972 film that became an international sensation.

The all-star guests on the 2004 album True Love range from legends like Keith Richards, Eric Clapton and Bonnie Raitt to younger stars including No Doubt, the Roots and Phish’s Trey Anastasio. Other recent releases include Light Your Light, Flip and Twist and the Grammy-nominated Unplugged on Strawberry Hill. At the heart of it all is that voice drenched in soul, rooted in gospel, and still breathtakingly powerful after almost four decades in the spotlight.

The event runs from 7:30pm to 10:30pm on the following dates.
Select a date to add this event to your calendar app.