'Get Your Knee Off Our Necks': On 57th Anniversary of Historic Civil Rights Rally, Tens of Thousands March on Washington 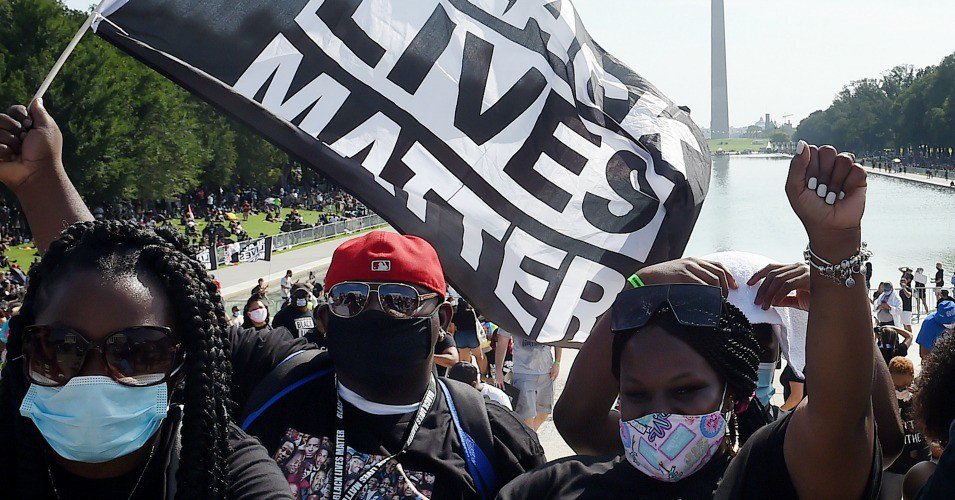 Demonstrators gather at the Lincoln Memorial during the "Commitment March: Get Your Knee Off Our Necks" protest against racism and police brutality, on August 28, 2020, in Washington DC. (Photo by Olivier Douliery/Pool/AFP via Getty Images)

An estimated 50,000 people are expected to attend the "Get Your Knee Off Our Necks" March in Washington, D.C. on Friday as racial justice advocates gather to mark the 57th anniversary of Dr. Martin Luther King, Jr.'s speech at the 1963 March on Washington and commit to fighting for meaningful criminal justice reform.

The name of the rally, led by Rev. Al Sharpton's National Action Network (NAN), refers to the killing of George Floyd by four Minneapolis police officers in May, which sparked a nationwide uprising over police brutality and helped pressure several cities to begin reassessing policing in their communities.

"Whether they are rallying on the steps of the Lincoln Memorial or from the safety of their homes and community streets, people are meeting this moment with demands and hope for change."
—National Action Network

The gathering comes days after the shooting of Jacob Blake by a police officer in Kenosha, Wisconsin. Blake is currently recovering in a hospital and is paralyzed from the waist down, according to his family. At a protest decrying his shooting on Tuesday night, a white 17-year-old gunman killed two people and injured another.

"Today is a chance for people around the nation to gather together to confront racial injustices in our police precincts and courthouses," said NAN, which is partnering with the NAACP, the National Urban League, the Hispanic Federation, and several labor unions and civil rights groups to organize the rally. "We've been here before, but this time we know that it is necessary to redefine public safety in order to save Black lives. Whether they are rallying on the steps of the Lincoln Memorial or from the safety of their homes and community streets, people are meeting this moment with demands and hope for change."

"Today is a day that all across the nation, in the midst of stacked pandemics—Covid-19 and racism—we address the national government and demand improved policing practices so that we stop the unwarranted killing and incarcerations of Black people," the group added.

The rally will be headlined by Sharpton and will feature speeches by the family members of several Black Americans killed by police in recent years, including Floyd, Breonna Taylor, and Eric Garner, as well as progressive Kentucky lawmaker Charles Booker, Missouri congressional candidate Cori Bush, and Martin Luther King III.

In addition to the crisis of violent policing faced by communities across the U.S., the rally will focus on voting rights ahead of the November general election, NAN said.

"This intergenerational inclusive day of action will demonstrate our advocacy for comprehensive police accountability reform, the census, and mobilizing voters for the November elections," the organization said on the event website.

For supporters who are unable to attend the demonstration in person, NAN is broadcasting the rally in its entirety online.

Ahead of the march, the ACLU tweeted King's famous "I Have a Dream" speech, which he delivered to more than 200,000 people at the March on Washington for Jobs and Freedom on August 28, 1963. The group shared the speech alongside present-day images of racial justice advocates demonstrating against recent police killings.

“And so we’ve come to cash this check, a check that will give us upon demand the riches of freedom and the security of justice.” #IHaveADream pic.twitter.com/4CJCvJmZeO

Organizers of the march are observing public health guidelines to prevent the spread of Covid-19. All attendees are required to wear face coverings, under a mandate from Washington, D.C. Mayor Muriel Bowser. Those who don't have a face mask will be given one when they arrive.

Organizers are also taking people's temperatures when they arrive and providing hand sanitizer, signage reminding participants to socially distance, and chairs positioned six feet away from one another on the steps of the Lincoln Memorial, where speakers will be appearing.

Journalists reporting from the rally posted videos on social media of participants arriving, hours before the speeches were set to start.

Friday also marks the 65th anniversary of the torture and murder of 14-year-old Emmett Till, whose killing helped galvanize the civil rights movement.

"The March for Justice is not done," tweeted Booker ahead of the rally. "Dr. King had a dream. As the legacy of that dream, we are standing now to demand change."

Common Dreams is  licensed under a Creative Commons Attribution