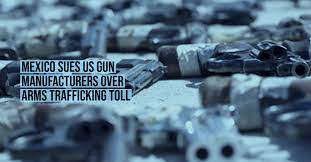 We look into the Mexican government’s lawsuit against U.S. gun manufacturers accusing them of arms trafficking and fueling the torrent of bloodshed in Mexico with more than 17,000 murders in Mexico linked to weapons trafficked from the U.S. in 2019 alone. Joining us from Mexico City is investigative journalist Ioan Grillo, a contributing writer at The New York Times specializing on crime, drugs and guns. The author of El Narco and his latest Blood Gun Money: How America Arms Gangs and Cartels, we discuss the $10 billion lawsuit filed in Boston against Massachusetts manufacturer Smith & Wesson Brands along with Colt Manufacturing Co., Beretta USA, Glock and Barrett Firearms Manufacturing. With Colt manufacturing its .38 Special pistol engraved with a portrait of Emiliano Zapata, it is hard not to conclude American gunmakers are marketing to Mexican drug lords since this same model handgun was used in 2017 in the assassination of the Mexican investigative journalist Miroslava Breach.