Rashida Tlaib and the Struggle to Redeem American Democracy 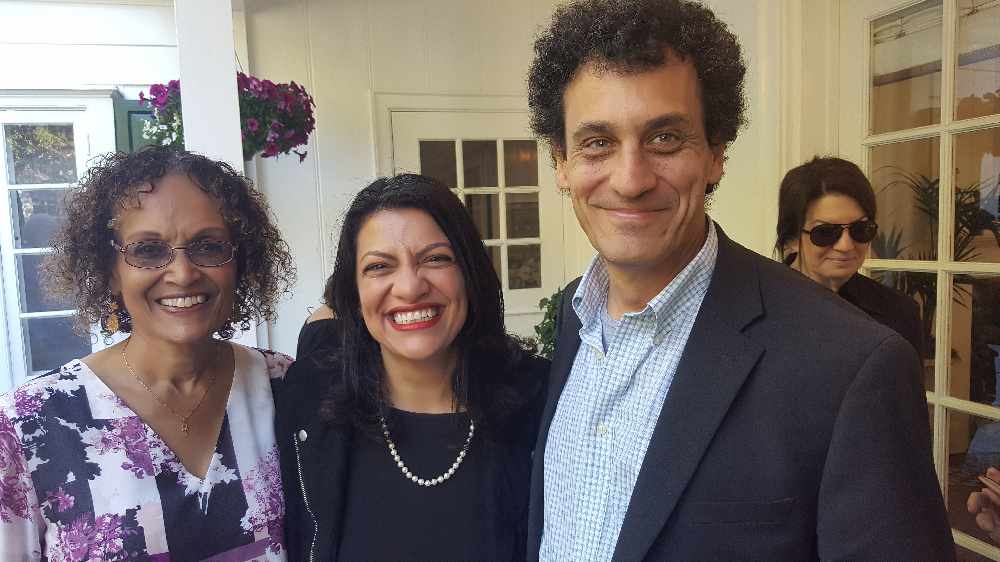 In 2019, the world was introduced to a new generation of American leadership when four brilliant young women of color entered Congress: Alexandria Ocasio-Cortez, Ilhan Omar, Ayanna Pressley, and Rashida Tlaib - aka The Squad.

In 2020, returning all four to Congress is a top priority for progressives; and should be for all Americans hoping for a better future for the country, the world, and the planet.

Of course, nothing would make American conservatives, as well as reactionary forces within the Democratic Party, more happy than for one of The Squad to lose. They understand that such a loss would be a devastating blow to a progressive movement that has been gaining momentum in recent years.

For that reason alone, Rashida Tlaib's upcoming primary election is as important as any election this year. Rashida faces a formidable challenge from a familiar opponent; in a race with a unique backstory.

In August 2018, Rashida won the Democratic primary for Michigan's 13th Congressional District by a razor-thin margin over a moderate Democrat, Brenda Jones; who, in turn, defeated Rashida in a different election for the same office on the very same day.

What happened was that both candidates ran in two elections held on August 18th: a special election primary to complete John Conyers' term; as well as the primary for the full two-year term. There were fewer candidates in the race to finish Conyers' term, and Jones prevailed there by less than 2% (1,643 votes) over Tlaib. In the more crowded primary for the full term, Rashida won by a mere 900 votes.

Now, the same Brenda Jones, the powerful head of the Detroit City Council, is challenging Rashida again. This time there are no other candidates in the race, which figures to help Jones. Almost everyone agrees that Jones would have won both primaries in 2018, except that other prominent figures from Detroit's Black political establishment siphoned votes from her, allowing Tlaib to squeak by. What is especially foreboding is that all of the other candidates from 2018 have endorsed Jones this year; consolidating the Detroit political machine against Rashida.

So, this year's primary (which finishes on August 4th) resembles a classic establishment vs insurgent race - only in this case the insurgent is the incumbent, who has also become a global political superstar over the past two years. Still, there is a very real possibility that Jones could prevail, delivering a huge head-line grabbing set back for the American left - and, by extension, a significant blow to American democracy.

There is scant faith among the general public that meaningful change can be achieved through electoral politics. The entire project of The Squad is intended to alter that perception (hence, the importance of winning).  This new generation of left progressives understands there are major barriers to achieving progressive change through electoral politics, but they are equally aware that government power is necessary to implement significant change; and that American democracy, even in its corrupted state, offers a pathway to winning political power. Thus, somewhat paradoxically, these young radicals are setting out to redeem the U.S. political system by using the electoral process to implement desperately-needed systemic changes to American society.

Changes that would dramatically improve the lives of the constituents of Michigan's 13th; and most other Americans as well.

The United States of America is both a very wealthy country and one with deep-rooted endemic social pathologies. What does that mean? It means that the country has very visible, severe social problems, which most Americans have to contend with every day. These have become so established as to appear as intractable; "normalized" to such a degree that people (are expected to) accept them as reality.

These include widespread poverty, with half of all households living precariously close to poverty (while the already-wealthy get ever-richer); a large and growing homeless population; unprecedented mass incarceration; militarized police forces; on-going drug epidemics; high violent crime rates; obesity and declining health indices; food deserts, and toxic pollution, in poor communities; underfunded schools and social services - all of it exacerbated, and facilitated, by institutionalized racism.

I'll say it again, so you can't miss the point. All of these atrocities are fixtures of contemporary American society... and you know you're lying to yourself if you think mainstream American politicians and their patrons have any intention of altering this reality.

Rashida Tlaib's Congressional District, Michigan's 13th, is home to some of the most inspirational activists and community revival-projects in the world (e.g. the incredible network of urban farms in Detroit). The desire there for social change is palpable.

Yet, capital long-ago fled the Motor City; and, with it, investment disappeared in neighborhoods throughout the 13th. No one who goes there fails to see the damage this has wrought. Detroit is famous as the most devastated post-industrial landscape in the world. The endemic social problems cataloged above are omni-present. Michigan's 13th is the third poorest congressional district in the country.

For decades, this district was represented by one of the most left-progressive Congressmen in American history, John Conyers. However, for the overwhelming balance of his tenure, from the 1980s onward, Conyers was forced onto the defensive by the right-ward drift of American politics. Conyers fought valiantly to protect a social safety net under attack by Reaganite Republicans; and then by neo-liberals at the head of his own party. He recognized the need for the left to re-make itself and present a bold, positive vision for social change. Year-in year-out Conyers championed causes like Medicare for All (Conyers "wrote the damn bill" long before his ally Bernie Sanders) and a government employment guarantee (which is included in the latest Green New Deal legislation). He understood these were necessities for a working class family to feel secure.

In all of these respects, Rashida Tlaib continues the 13th District's tradition of sending a progressive visionary to Washington.  However, history has shifted. Left-progressives are no longer so marginalized. In fact, millions of Americans are raising their voices, demanding exactly the type of systemic change as Rashida and the Squad.

However, radical change doesn't come easy. Does the new progressive left have realistic plans to remedy America's endemic social ills, and the dramatic impact they have on places like Michigan's 13th? Aren't these the product of decades of dis-investment? Wouldn't a reversal of this trend require a wholesale social and economic re-organization of society?

The answers to those questions are Yes, Yes, and No - as long as true left progressives like Rashida Tlaib keep on winning elections.

Rashida Tlaib is the real deal, an exceptional public servant on all fronts.

I've had the privilege of co-hosting an event with Rashida Tlaib. I've also participated in an activist action with her, and witnessed her make a powerful presentation at the Congressional Progressive Caucus Center on the People's Housing Platform, a legislative initiative to guarantee housing as a human right.  Not surprisingly, Rashida faced challenging questions at the event we co-hosted. She handled them with grace, a welcoming sense of inclusivity; and still made strong persuasive arguments throughout.

There's no denying that Rashida has tremendous charisma (with a million-watt smile), yet she is as down-to-earth as anyone you could hope to meet. (Want proof? Check out her interview with Democracy Now's Amy Goodman a few days after her election to Congress). Not surprisingly, Rashida has been very accessible to the members of her district these past two years. She is truly of the community, by the community, for the community.

As such, Rashida Tlaib fully understands how much needs to be done to lift Michigan's 13th into the realm of middle class prosperity. She also understands the centrality of government policy for achieving that end. After all, the state determines both society's laws and the parameters of the economy (including those of the market) in all industrialized/technological 21st Century societies. The contemporary American right-wing fully grasps this, hence their astronomical expenditures on elections, and their voter disenfranchisement shenanigans, etc.  Somehow, this truth is lost on a significant portion of the left, but understood fully by Rashida and the Squad.

Thus, these young radical Congresswomen occupy a unique and central role in current politics. They share a social critique with the millions of largely young Americans who poured into the streets following the murder of George Floyd, demanding not just an end to murderous racist policing, but to the entirety of American structural racism. Rashida is now one of the two lead sponsors, along with Ayanna Pressley. of the Movement For Black Lives-endorsed Breathe Act; which calls for the divestment of Federal funds from policing and incarceration, and the investment of those funds into new, alternative approaches to public safety, and into building "healthy, sustainable, and equitable communities for all people."

We do not know with certainty where those millions of protestors fall on the ideological spectrum; but all evidence suggests they not only loathe the perpetuation of America's institutionalized, structural racism; but understand its direct relationship to much of America's endemic social pathologies.  There is a voracious appetite in the land for justice, and for building an anti-racist society with more shared prosperity.

Among our elected officials, only left-progressives will pursue this agenda. Without a major re-setting of government policy - comparable to FDR in 1933 (to the left) and Reagan in the 1980s (to the right) - America's endemic social pathologies will surely persist. The current slate of well-known left progressive programs - such as Medicare for All, the Green New Deal, living wage and full employment mandates, and now the Breathe Act - would provide a solid foundation for such a necessary and seismic shift .

Rashida Tlaib will pursue these ends and more. She is a leader for our times.

A loss by Rashida would be devastating not only for progressives, but also for Palestinians and those of us who support Palestinian human and political rights. Rashida is Palestinian-American and she's an outspoken advocate for the Palestinian cause; which, of course, puts her at odds with the U.S. foreign policy establishment. While the Israeli Government, President Trump, and Republicans in Congress have all levelled attacks against Rashida, she has remained an unwavering voice of reason; reiterating principled positions backed up by facts.  Support for the Palestinian cause is growing in America; and Rashida is a great spokesperson for the movement.

One more reason why the world will be a better place if Rashida Tlaib wins on August 4th; in what I consider the most important Congressional primary of 2020.