The Hilarious Death of the Pathetic Cyber Ninjas: 'BradCast' 1/11/2022 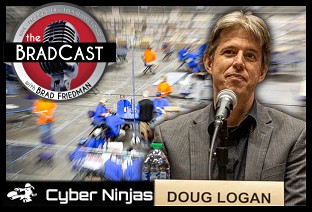 As it turns out, it wasn't an attack from highly skilled opposition mercenary warriors trained in the art of espionage, deception and surprise attacks that took down the Cyber Ninjas. It was their own incompetence, dishonesty and hopes of escaping huge court fines for failing to follow the rule of law that appears to have done them in. Or, perhaps they're just in hiding, ready to pounce again when they are least expected! [Audio link to full show is posted at bottom of this summary.]

First up on today's BradCast, however, before we get to the "death" of the Ninjas and their ongoing clown show, President Biden and Vice President Harris traveled to Atlanta on Tuesday to call for U.S. Senate filibuster reform in order to pass voting rights and election protection legislation with a simple majority. That, in hopes of countering voter suppression and election subversion measures being adopted by GOP controlled states across the nation.

All 50 Senators who caucus with the Democrats (plus Vice President Harris) are on record in support of the critical Freedom to Vote Act and John Lewis Voting Rights Advancement Act. But in the U.S. Senate, while that simple majority vote may be enough to cut taxes or allow drilling and mining on previously protected federal lands or seat Supreme Court Justices for life, it's currently not enough votes to protect American democracy. Not with the Republican Party now fully in opposition to both voting rights and democracy while Senate rules require a 60-vote super-majority to pass both pieces of legislation.

As Biden pointed out in his remarks today --- for the first time, offering a full-throated call to reform the Senate rules --- the united GOP opposition to voting rights is fairly new. Until recently, even Republicans voted in support of expanding and protecting voting rights at the federal level --- at least enough of them to overcome a Senate filibuster. But not anymore. At the same time, obstructionist Democrats Joe Manchin (WV) and Kyrsten Sinema (AZ) have refused to allow the majority to create a carve-out to the filibuster --- akin to hundreds of others in the Senate --- to adopt the legislation that both of them claim to support.

This week, Manchin even went so far as to describe the filibuster to reporters as a critical Senate tradition that has been in place "for 232 years." In fact, the filibuster as we now know it has been in place since 1975, as historian Max Kennerly explained on a Twitter thread in response to Manchin. "232 years ago, in 1790, a simple majority could end any debate," he notes. And Adam Jentleson, Harry Reid's former Chief of Staff who wrote a book on the filibuster, went so far as to alert Manchin to how much the Constitution's framers virulently opposed a super-majority requirement for anything at all, quoting both "father of the Constitution" James Madison and Alexander Hamilton from The Federalist Papers. (Which is why there is no such requirement in the Constitution.)

Whether the Biden/Harris calls in Atlanta for reform will have any effect on the clueless Manchin and the similarly disinformed or dishonest Sinema remains to be seen. Senate Majority Leader Chuck Schumer continues to insist that "failure is not an option", vowing a series of votes on the matter between now and Monday's Martin Luther King Day holiday.

Meanwhile, the GOP fight against election integrity may have hit a few embarrassing snags after their infamously failed "post-election forensic audit" in Maricopa County (Phoenix), Arizona last year. As you already know, the state GOP Senate's taxpayer funded audit theater found no Chinese bamboo in the County's 2.1 million hand-marked paper ballots, but it did declare that Joe Biden defeated Donald Trump by even more votes than originally certified. And if you follow The BradCast, you also may know that real election audit experts discovered that even those numbers were apparently "made up out of whole cloth" by the Ninjas, whose actual count of the ballots (never mind the results on them) was off by tens of thousands.

The final report that the Ninjas and its CEO Doug Logan produced last year on behalf of the GOP State Senate, also included 77 claims of "possible" fraud in the County's reported tallies and other questions to raise alarms about the legitimacy of tens of thousands of "maybe" illegal votes.

As it turns out, however, according to a 93-page, point-by-point rebuttal [PDF] of each of those claims, released last week by the Republican-majority Maricopa County Board of Supervisors after months of investigation, 76 of the Ninjas' 77 claims were completely wrong.

For example, according to the Ninjas' final audit report, 5,295 voters "potentially voted in multiple counties" in Arizona. The county found, however, that, in reality, just 5 voters may have done so. (They've forwarded their findings to the state AG). The Arizona Republic's Jen Fifield offers a helpful, detailed summary of most of the key rebuttals from the County, explaining how the Ninjas got it so embarrassingly wrong on virtually every "misleading, inaccurate and false" score.

The County's response to the Ninjas' pathetic report was mostly lost, however, amid the news the next day that the Cyber Ninjas were claiming to be no more. A spokesperson announced that they had shut their doors and all employees, including founder and CEO Logan, had been let go, following a contempt ruling from an Arizona Superior Court Judge. He found that failure by the Ninjas to turn over thousands of pages of public records documenting their "audit", its financing, and their communications with officials about it in two separate lawsuits violated the law. The plaintiffs sought a $1,000/day penalty until the documents were turned over. The judge informed the Ninjas they would be fined $50,000/day instead! They then declared they no longer existed, like a ninja disappearing into the night! Except they are really shitty ninjas.

The judge has stated that their claims at insolvency in an attempt to shut down to avoid the court fines was not going to work, threatening to apply the $50,000 daily fine to individuals with the company, like "former" CEO Logan. As it turns out, Logan formed a second company last year named Akolytos, using the same business and mailing addresses as the Cyber Ninjas. But his hopes of escaping the court fines through that second company may not work either, as journalist Kim Zetter details in her latest, excellent Zero Day newsletter. SAD!

Finally, as the Northeast grapples with a brutal cold snap today, Desi Doyen joins us for our latest Green News Report, detailing the record warmth of 2021, and the disturbing increase in emissions causing our climate emergency over the past year...