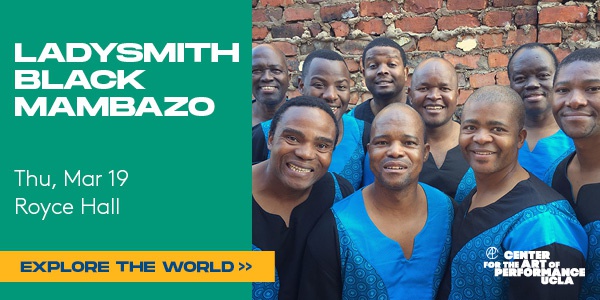 We regret to inform you that due to the passing of Joseph Shabalala, the founder of Ladysmith Black Mambazo, the group's performance date has been changed from Thursday, February 20th to Thursday, March 19th so that the company may attend his funeral in South Africa. Joseph’s four sons, who have led the group since their father retired in 2014, will continue to celebrate his life and legacy. Tickets for February 20th will be honored for the March 19th performance, however if you are unable to attend you may request a refund or exchange your tickets for another performance in our 2019-20 Season (except for Pina Bausch’s Palermo, Palermo at The Music Center). Please call the UCLA Central Ticket Office at 310-825-2101 for ticket exchanges or refunds (Monday - Friday 10am - 4pm).

The company joins us in apologizing for the inconvenience. Thank you for your understanding.

“It isn’t merely the grace and power of their dancing or the beauty of their singing that rivets the attention, but the sheer joy and love that emanates from their being.” —Paul Simon

For more than 50 years, South Africa’s five-time Grammy Award winners Ladysmith Black Mambazo have warmed the hearts of audiences worldwide with their uplifting vocal harmonies, signature dance moves and charming onstage banter. With a deep respect for both their cultural and personal history, Ladysmith Black Mambazo is ever-evolving with an eye toward their long musical legacy. Since the world discovered their powerful a cappella vocals on Paul Simon’s Graceland album, the original members have welcomed a younger generation into their mission, passing along the tradition of storytelling and spreading a message of peace, love and harmony to millions of people the world over.

Now led by the four sons of group founder Joseph Shabalala, an infusion of youthful energy and the promise of a bright future has a firm grip within the group. It was Nelson Mandela who anointed them “South Africa’s cultural ambassadors to the world,” a designation the members carry with them to this day with the highest honor.