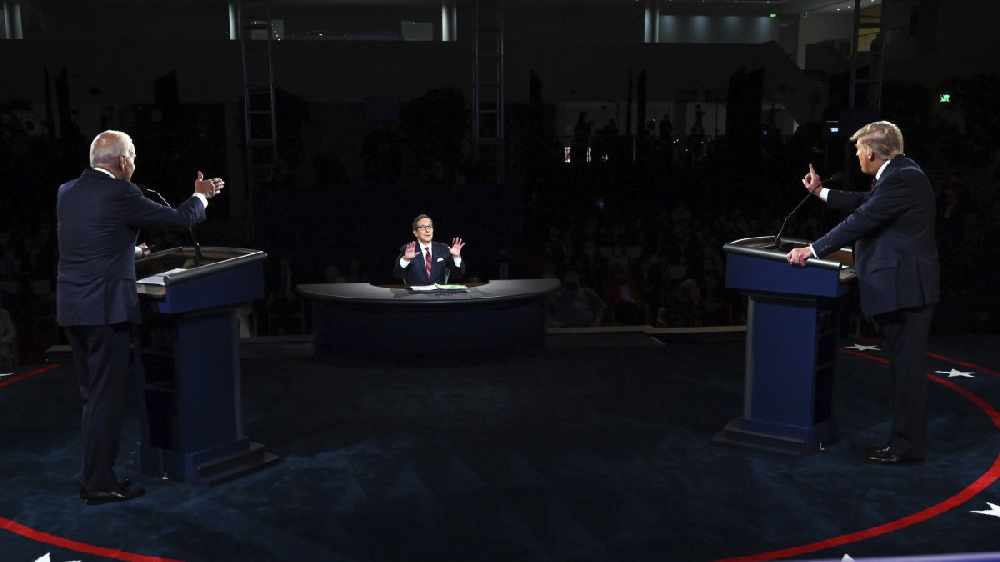 If you didn’t catch the first presidential debate of 2020 tonight — and if you didn’t, and did virtually anything else with that time, congratulations on a restful evening well-spent — you missed a cameo appearance by California.

The Golden State made its entrance around the 75-minute mark.

That was presumably long after everyone but the most ardent of political nerds had called it quits.

It was after President Donald Trump said that he would — but then ultimately did not — denounce white supremacists and western chauvinist activists. And it also came after former Vice President Joe Biden, refusing to take a position on whether Democrats should pack additional justices onto the Supreme Court, turned to the perpetually interrupting president and asked, “Will you shut up, man? This is so un-presidential.”

Debate moderator Chris Wallace of Fox News attempted to raise the quality of discussion during the COVID-19 portion of the evening — “an awfully serious subject,” he reminded the two candidates, “so let’s try to be serious about it.”

Alas. Within minutes, Trump was questioning Biden’s academic credentials. “There’s nothing smart about you, Joe.”

When California did finally come up, it was ushered onto the stage by Trump, playing its obligatory role as ecotopian basket case and presidential whipping boy.

Wallace: “Do you believe that human pollution — gas, greenhouse gas emissions —contributes to the global warming of this planet?”

That half-admission that the globe may be warming thanks to human activity was a softening of the position the president took earlier this month on his visit to a smoke-billowing California. In a televised back-and-forth with state Natural Resources Secretary Wade Crowfoot, the president dismissed any concerns about climate changing, insisting that the planet will actually “start getting cooler.”

This is now the third year running that President Trump has responded to historically catastrophic wildfires in California by blaming the state for poor forest management.

Most foresters and ecologists agree that overly aggressive fire suppression and inadequate management of dead trees has, along with climate change, created the preconditions for the state’s chronic wildfire problem. One wrinkle: The State of California only manages 3% of the forest land here. About half is managed by the federal government.

When it was Biden’s turn to respond, he pivoted away from California by name. But running through the bullet points of his campaign’s environmental plan, the list sounded familiar to Californians: spurring the adoption of electric trucks by building out a network of charging stations, incentivizing renewable energy production, and achieving a goal of “net zero emissions” from the national electricity grid by 2035.

For the record, Trump chimed in that he is “all for electric cars.” But, he added, “what they’ve done in California is just crazy.” That was likely an attempt to make political hay of Gov. Gavin Newsom’s executive order last week calling for the phasing out of gasoline-powered cars by 2035.

And when the topic came to voting-by-mail, the president lambasted the decision by states such as California to automatically send mail ballots to all active, registered voters — repeating the oft-debunked claim that voting by mail is a recipe for voter fraud.

But it wasn’t all ragging on Democrat-dominated California.

During his riff on the state’s wildfire problem, Trump noted that he was “getting along very well with the governor” of California.

And earlier on in the debate, Trump gave another friendly nod of sorts to Newsom — although not by name.

Reminiscing about the early months of the coronavirus outbreak, when Trump and Newsom very publicly and uncharacteristically made nice, Trump reflected: “Many of your Democrat governors said President Trump did a phenomenal job,” he said to Biden. “People that would not necessarily be on my side said that.”