California is the second most vegan state for 2021 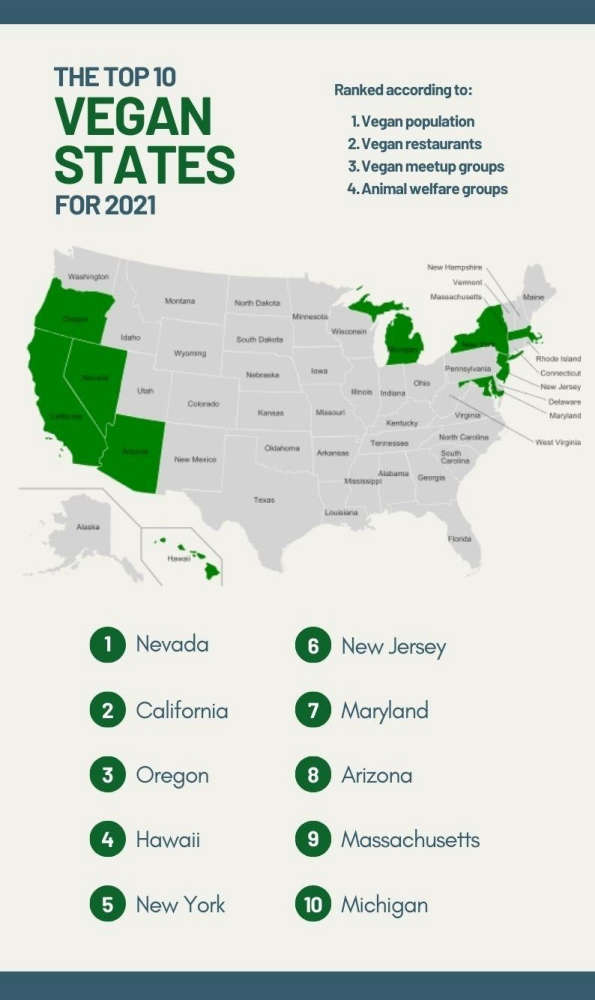 Veganism has gained a lot of support in America in the last 20 years, with many people making that lifestyle change for both health and ethical reasons.

As with most human behavior changes, trends towards veganism have been very different from state to state.

That’s why we had our team focus on researching and gathering data from all 50 states to come up with a definitive list of the most vegan states of 2021.

How Did We Rate Each State?

Our research approach focused on four indicators that we measured for every state, and with that complete data set, we could then rank all 50 states.

To assess the vegan population of a state, we looked at online search trends published by Google.

We measured the average monthly search volume for the phrase “vegan restaurants” for each state, as this is the clearest indication of how interested the local population is in vegan dining.

The final step in this research involved weighing the search volume of each state on a per 1 million people basis to achieve a data set that allowed for clear comparison and ranking.

The second most important data point in this research involved gathering details about the total number of dedicated vegan restaurants in each state.

Our team approached this using online resources to gather details from Google Maps, HappyCow.com, and Yelp.com.

The critical part of this research was that we strictly focused on vegan restaurants and excluded vegetarian ones where we would have had to make subjective decisions about how vegan each restaurant was.

Weighing the number of restaurants against the population provided a clear objective ranking.

The third part of our research data looked at how many vegan meetup groups are registered in every state to gauge how active the vegan population is in promoting this lifestyle.

We were able to quantify this data by using online resources at Meetup.com and Google search, which proved to be the most reliable sources.

In order to be able to compare states of different sizes, we also weighted the data per 1 million people.

And finally, we looked at how many animal welfare groups were registered in each state as an indicator of people’s support for animal rights.

Google Maps proved to have the most reliable information about animal welfare groups and shelters.

The final step was again to weigh this number per 1 million people to make a comparison between states possible.

The Top 10 Vegan States in America

The most significant driving factor for Nevada achieving the top ranking came down to very strong growth in search traffic among the local population. And once we added a fourth-place ranking for the number of vegan dining options, we got data that put Nevada marginally ahead of California.

With a slightly lower search volume, and number of vegan restaurants per 1 million people than Nevada, California still ranks very high with a growing trend in both data sets.

It’s also a state that has a lot to offer vegans who want to grow their circle of vegan friends through organized meetup groups.

Oregon has a solid ranking in the top 5 for search volume, but it was the third-place ranking for vegan restaurants that pushed it up into the overall third place.

The one area where there seems to be the most opportunity to gain some rankings is through organized meetup groups.

The data point that stood out the most for Hawaii is the density of restaurants. It seems like both locals and people vacationing on the islands have a significant demand for vegan dining experiences.

Combined with the eighth-place finish for the number of people using vegan search terms, the data supported a strong overall ranking.

One thing we noted during our research is that NYC has the highest density of vegan restaurants. However, that density doesn't continue throughout the state.

The strong overall search trends have supported a top 5 finish for NY, and there are many active meetup groups to find more like-minded people.

What stands out the most for New Jersey is that despite only ranking in 18th place for local search trends, it’s the highest-ranked state for the selection of vegan restaurants.

With 29 vegan dining choices per 1 million people, New Jersey is well ahead of second-place Hawaii with 19 restaurants.

Maryland made it to the top 10 due to good supporting search trends and choice of restaurants. It stands out on this list, especially when you consider the small population size.

We also found that it’s one of the better places to get involved with meetup groups and animal rights support.

The surprising fact about Arizona’s data points is that it ranks in fourth place for search trends but only in 24th place for the density of vegan restaurants.

That would suggest that there is significant scope for more vegan dining options to open up and support that growing search trend.

Opposite to Arizona’s data, Massachusetts is one of the top-ranking states for the selection of dedicated vegan restaurants, but it only ranks in 17th place for Google searches.

Massachusetts also ranks very high when it comes to animal welfare activity and meetup groups throughout the state.

The 10th place is another well-deserved one with a good combination of high search trends and the number of vegan restaurants.

But what stood out more for us was the very high fourth place for both the number of animal welfare and meetup groups available.

Here’s the full list of all 50 states in order:

A detailed look at each set of data points provides some interesting insights into where each state is performing particularly well.

The following is the detailed ranking for the four data sets we analyzed.

These are the ten best states for the number of vegan restaurants to choose from.

While California has the highest total number available in very densely populated areas like LA and the Bay Area, it’s New Jersey that has set a new mark for the availability of vegan restaurants per capita.

This is the list of states with the highest Google searches for “vegan restaurants” per 1 million people.

There are a few surprises in there, including Texas, which would be more famous for traditional BBQs. With Texas not on the top 10 list for vegan restaurants, that could be a good indication that the vegan population per capita has outgrown the number of available vegan restaurants.

Here is the list of U.S. states based on the number of meetup groups per capita.

The overall rankings favor some of the smaller states, but it’s a good indication that residents of less densely populated states have become a lot more active in getting organized and spreading the lifestyle.

Based on our research it looks like a lot of the smaller states seem to be leading the way when it comes to providing animal welfare services.

What surprised us the most about Delaware is that the state has almost twice as many animal welfare groups per capita as second ranked South Dakota.