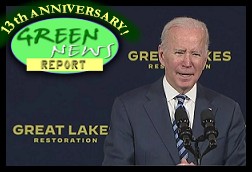 'GREEN NEWS EXTRA' (Stuff we didn't have time for in today's audio report)...

For a comprehensive roundup of daily environmental news you can trust, see the Society of Environmental Journalists' Daily Headlines page