Marginalized Communities Could Be 'Shortchanged' for Decades to Come by Trump's Abrupt Change to Census Deadline, Critics Say 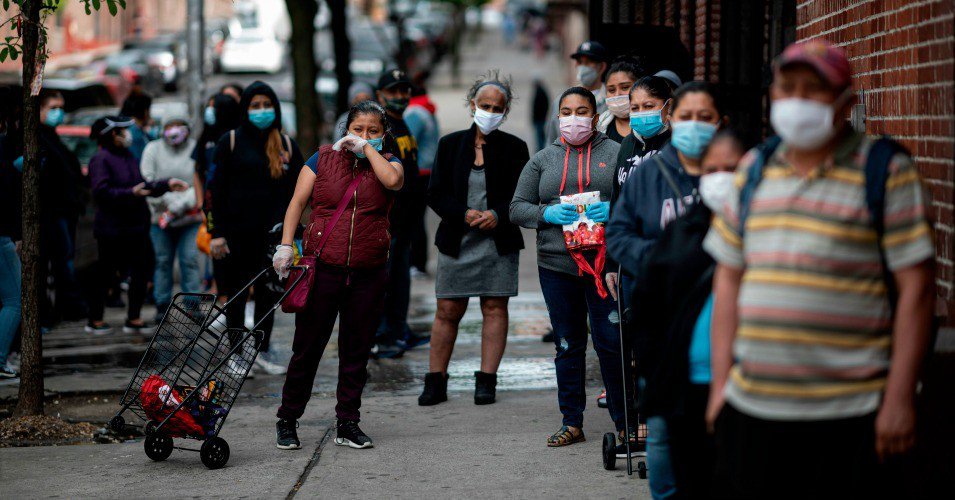 People in need line up for food donations on May 19, 2020 in the Bronx borough of New York City. (Photo by Johannes Eisele / AFP via Getty Images)

In addition to imposing likely delays in the delivery of mail-in ballots during the November elections through its sabotage of the U.S. Postal Service, the Trump administration appears intent on jeopardizing elections and marginalized communities for decades to come, critics said Sunday of the president's abrupt change to the U.S. census deadline.

When the coronavirus pandemic began, the deadline for the 2020 census was extended from mid-August to late October. When the Census Bureau announced last week that it would require the survey to end September 30, advocates for marginalized communities warned that the new deadline could result in a severe undercount of people in largely Black and Latino neighborhoods, rural areas, and other often-overlooked parts of the country.

Federal funding for elections, education, free and reduced lunch programs, and other community programs is determined based on census data, and an inaccurate count of people in under-represented areas could result in years of insufficient funding, experts say.

In a Washington Post report, advocates on Sunday pointed to largely Black, Latino, and Indigenous communities which were already facing an undercount even before the deadline was changed.

"If certain areas are not represented with their full accurate count, that means their funding will be diminished as well," Diana Elliott, principal research associate at the Urban Institute, told the Post. "I think, for example, of the Rio Grande Valley. That area of Texas will get less money than, say, the suburbs of Dallas. And that's not really a fair and equitable distribution of resources."

On social media, journalist Jamil Smith wrote that the shortening of the deadline, particularly during a pandemic that's driven response rates down, will be catastrophic for political representation as well as community funding.

Census data is used to draw boundaries for legislative districts and to determine who represents communities in the U.S. House.

"This will likely undermine Latino and Democratic representation in redistricting for a decade and potentially beyond because lawmakers elected under 2020s districts in many states will be the ones drawing 2030s districts," tweeted Stephen Wolf of Daily Kos Elections.

Census experts are concerned about the counting of people in rural areas where broadband access is limited, low-income neighborhoods, immigrant communities, and other places where government distrust is prevalent as census-takers begin collecting data door-to-door on Tuesday, following an online survey.

The changing of the census deadline came days after Trump was sued by the ACLU, Common Cause, and a coalition of 21 states over his memo advising that undocumented immigrants should not be counted for the purpose of congressional seat apportionment.

"We're in the middle of a global pandemic, and they might be shortchanging every Latino community for 10 years to come. This is cruel," Lizette Escobedo of NALEO Educational Fund, a Latino rights group, told the Post.

The Lawyers' Committee for Civil Rights Under Law on Saturday warned that Postmaster General Louis DeJoy's "Friday Night Massacre" at the USPS will further undermine an accurate count of people living in the United States.

"The postal service helps ensure that our nation's most vulnerable communities are receiving medications and resources during the pandemic," said Kristen Clarke, president of the group. "It is also critical to the efforts to achieve a full and accurate 2020 Census."