“Our Movement Is Growing”: How Starbucks Workers in Buffalo Fought Company’s Union Busting and Won

“Our Movement Is Growing”: How Starbucks Workers in Buffalo Fought Company’s Union Busting and Won

We look at the historic workers’ victory at the Elmwood Starbucks store in Buffalo, New York, where workers successfully voted to unionize last week, making them the first to do so among the coffee chain’s 9,000 locations in the United States, and sparking new efforts at stores across the country. We speak to one of the 19 employees who voted in favor of forming a union about confronting the company and overcoming the challenges. Starbucks hired “the most notorious union-busting law firm in the country and literally ran not even a textbook anti-union campaign but an almost unprecedented anti-union campaign,” says Jaz Brisack, a barista at the Starbucks located in Buffalo.

This is a rush transcript. Copy may not be in its final form.

AMY GOODMAN: This is Democracy Now!, democracynow.org, The War and Peace Report. I’m Amy Goodman, with Juan González, as we turn now to look at the historic workers’ victory at the Elmwood Starbucks store in Buffalo, New York, where workers successfully voted to unionize last week, making them the first to do so among Starbucks’ 9,000 locations in the United States.

AMY GOODMAN: Workers cheered as the results of their vote were announced. Nineteen workers voted in favor, eight against, forming the union. A union vote failed at a second Buffalo Starbucks location, and a third election at the Buffalo airport Starbucks has not yet been confirmed after nearly half the “yes” votes were challenged. The National Labor Relations Board, or NLRB, will now review those votes. The victory in Buffalo came despite Starbucks’ union-busting efforts and could trigger similar drives at more of its stores across the country. Already, on Monday, workers at two Massachusetts Starbucks, in Boston and Brookline, filed paperwork with the NLRB petitioning to unionize.

For more, we’re joined by one of the Starbucks workers you just heard cheering in Buffalo. Jaz Brisack is a barista at the Elmwood Starbucks store there. She is now the first — this is now the first location of Starbucks to unionize. She’s with Starbucks Workers United.

Welcome to Democracy Now! It’s great to have you with us, Jaz. Why don’t you explain the significance of your victory, and also what Starbucks did, bringing in management from all over, the highest levels, to try to pressure workers?

JAZ BRISACK: Thanks so much for having me. And I think, like you’re saying, it’s important we won our union, thank goodness. And the Genesee store, which was actually packed with people who don’t even vote at that store, to try to inflate the voter list, we’re confident that they’re going to also be the other of the first unionized Starbucks. But it shouldn’t have had — we shouldn’t have had to go through all of the union busting that we’ve gone through in the past four months.

Starbucks sent in a SWAT team, they called it, of upper managers, over a hundred of them, led by the president of Starbucks North America, Rossann Williams. And these managers came into our stores. They were there in every shift, every day part, pulling people off the floor, working on the floor so that they could prevent us from being able to have honest conversations with our partners. And we went from having, you know, 85% at my store — 100% of voters signed up on union cards at Genesee — to fighting for our lives to even win one of these first Starbucks unions.

JUAN GONZÁLEZ: And could you talk, Jaz, about some of the conditions that prompted the employees to believe that they needed to unionize?

JAZ BRISACK: I mean, honestly, we were unionizing because we wanted a voice in the workplace. We didn’t think that Starbucks was by any means the worst employer. There’s things that could always be better. I had a co-worker — when we started the union campaign, she had been there 11 years. She was making 16 cents more than a new hire. And certainly, like, healthcare and mental health and certain things could be better. But we really just want a voice on the job. And we want — we don’t believe that any job should not have a union, because we think that everything should have more democracy.

And I think the real crisis or tragedy here is, we would have won so many more stores already if we had actually had a fair process for these votes. But instead, Starbucks took advantage of every delay tactic possible, most of which were loopholes created by the Trump labor board, to delay us getting to our votes and actually being able to unionize, and to give them more time to have anti-union meetings and threaten us with losing benefits, losing the right to pick up shifts or transfer, and trying to pit us against our fellow partners, against our managers, and blame the union for all of the stress and tensionn that we were feeling.

JUAN GONZÁLEZ: And could you talk about the company tactics? Starbucks portrays itself as an enlightened, socially conscious company. Were you surprised by the vehemence with which they marshaled their forces to prevent this union drive?

JAZ BRISACK: One hundred percent. In the beginning, we actually asked them to sign the fair election principles, which is a set of guidelines that sets a higher standard than U.S. labor law for how companies act during union elections. And, you know, it seems naive that we expected them to sign it, but, instead, this company, that says that they’re a social justice company — they say they’re a different kind of company — hired Littler Mendelson, which is the most notorious union-busting law firm in the country, and literally ran not even a textbook anti-union campaign but an almost unprecedented anti-union campaign of bringing in literally the COO, the president of Starbucks North America and all of their other corporate underlings to try to disrupt Buffalo and turn our stores upside down.

AMY GOODMAN: And can you talk about what happened at the other two Starbucks where the workers were attempting to unionize? The results, not completely in — is that right? — are being challenged on both sides.

JAZ BRISACK: So, at Camp, they were totally disrupted. And there were some ballots that weren’t actually counted, so we’re still figuring out what all happened there. And then, at Genesee, they had stacked the voter list with partners from other stores that were remodeling. Not every worker who worked at that store got a ballot. They selectively picked who they wanted to receive ballots and put on that voter list. One of our partners told Bernie Sanders during the town hall that he hosted that it was like if you had partners — sorry, if you had tourists from Texas visit Vermont and then vote in Senator Sanders’ Senate election. So, I think once those ballots are cleared up, it’s going to be a clear victory at the Genesee store.

AMY GOODMAN: And finally, your response to hearing that Brookline and a Boston store are already attempting to unionize there? And go beyond just Starbucks, your message?

JAZ BRISACK: I think our movement is growing. I’m incredibly proud of the Boston partners, the Arizona partners and the partners in the other stores in Buffalo. I do want to note that there’s three more stores that are going to union elections. And Starbucks is terrified that Elmwood will be the first domino, so they’re already cracking down much harder. We have an organizing committee leader, Angel, in one of these stores who’s being written up and retaliated against for the most minor of things. They’re finding ways to target her, because they realize that what they were doing earlier wasn’t enough to stop us and break us apart, so they’re trying to go even harder. So we need even more community pressure on Starbucks to stop union busting and actually come to the bargaining table and work with our union instead of busting it.

AMY GOODMAN: Jaz Brisack, I want to thank you for being with us, barista at the Starbucks store in Buffalo, New York, which has become the first location in the United States to unionize, the first Starbucks location. She’s with Starbucks Workers United.

The original content of this program is licensed under a Creative Commons Attribution-Noncommercial-No Derivative Works 3.0 United States License. Please attribute legal copies of this work to democracynow.org. Some of the work(s) that this program incorporates, however, may be separately licensed. For further information or additional permissions, contact us. 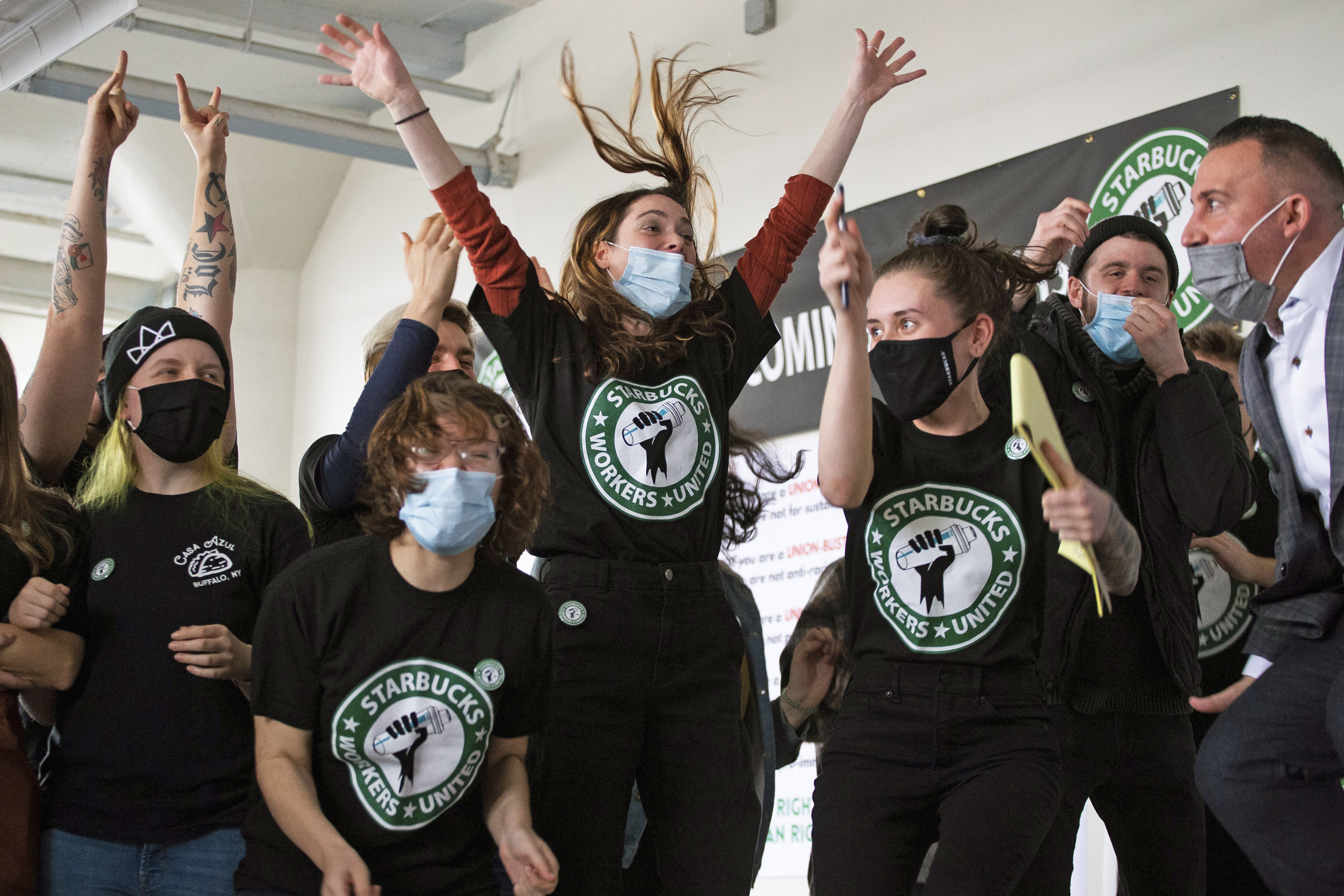