'The Ship is Leaving the Rats': On Trump's NY Woes and Ticking Clock on Obstruction Charges: 'BradCast'

'The Ship is Leaving the Rats': On Trump's NY Woes and Ticking Clock on Obstruction Charges: 'BradCast' 2/16/2022 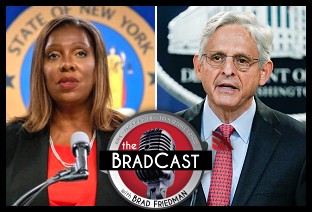 The clean up on aisle 45 seems to never end on The BradCast. But a whole bunch of experts (including our guest today) suggests our disgraced former President is inching ever closer to some very bad news --- at least in New York. [Audio link to full show is posted at end of this summary.]

First up, some other news not getting enough coverage today...

Then, it's on to our guest today, for insight on a number of related matters.

Earlier this week, it was revealed that Trump's longtime accounting firm, Mazars USA, informed him and his family business last week that they would no longer be doing business with them. Moreover, they informed Trump that nearly 10 years of annual financial statements they'd prepared for him and the Trump Organization should no longer be relied upon to be accurate in any way, as it was based on faulty information supplied by Trump.

The company informed Trump that Statements of Financial Condition created from 2011 to 2020 were being retracted and that, due to a "conflict of interest", they would no longer be working for his company. The news came via a court filing on Monday by New York state Attorney General Letitia James in response to the attempt by Trump and his children to avoid depositions in James' civil investigation into alleged bank, tax and insurance fraud by all of them. The Manhattan D.A. is also running a concurrent criminal probe into many of the same matters.

Since that news became public this week, a number of legal experts have explained that Mazars' "conflict of interest" almost certainly means the firm is now cooperating with New York prosecutors against Trump and his businesses. Longtime Trump investigative reporter David Cay Johnston told CNN on Tuesday that he believes Trump and his company and maybe even his kids, will, in fact, be indicted on racketeering charges in the state.

We're joined today by former Asst. U.S. Attorney RANDALL D. ELIASON, who spent years as Chief of the DoJ's Public Corruption/Government Fraud section in D.C. He's now a law professor at George Washington University Law School where he is an expert in white collar criminal law. Eliason offers helpful insight into Trump's increasingly serious New York troubles and discusses his recent opinion piece at Washington Post calling on Attorney General Merrick Garland to explain himself in regard to the DoJ's probe (or lack thereof) into the 10 or more obstruction of justice allegations detailed by Robert Mueller in the report on his Special Counsel investigation.

On the New York matter(s), Eliason cites a recent comment he'd heard that Mazars' dumping of Trump suggests "the ship is leaving the rats." He charges that the financial firm is clearly "trying to distance themselves, and that suggests they see something bad coming down the road for their client." He concurs that "the most likely explanation for what's going on is that Mazars is now cooperating, either in the criminal case or the civil case, or both, and potentially testifying against Trump and the Trump Organization. That definitely creates a conflict of interest, to where they'd say, 'Well, I can't be your accountant anymore because now I'm actually a witness against you.'"

Eliason also offers a very helpful explanation of what racketeering charges actually are, and how, if Johnston is right, that might play into the New York state prosecutions and even the investigation by Fulton County, Georgia District Attorney Fani Willis into Trump's conspiracy to steal the 2020 election in the Peach State. Eliason further helps us understand how both the NY state Attorney General and Manhattan D.A. could both ultimately bring charges for the same set of fraud crimes, but as a civil matter (resulting in fines and other such penalties) by the A.G. and as a criminal indictment (potentially resulting in prison time) by the D.A.

As to the curious case of Merrick Garland, as Eliason highlighted in his recent Post op-ed, he does not count himself among those who think that Biden's Attorney General is necessarily dropping the ball. But he does believe an explanation is warranted to the American people regarding any potential investigations of Trump on the many cases of obstruction painstakingly spelled out in Mueller's Special Counsel report on Russian interference in 2016 and Trump's related firing of FBI Director James Comey.

On Monday, the statute of limitations into the oldest such obstruction allegation cited by Mueller has now run out. (That, as Eliason detailed at the Post, was "Trumpâ€™s alleged request to then-FBI Director James B. Comey to drop the criminal investigation of disgraced former national security adviser Michael Flynn. Other acts of possible obstruction soon will be similarly time-barred.")

"This clock is ticking away," Eliason tells me today. "Given the size of the investigation, the seriousness of the investigation, the detail in that report, even though DOJ doesn't normally comment on cases that it's not going to bring, or that it's not prosecuting, in this case they should. They should tell us something about what's happened with that Mueller Report now that we have an administration in office that is not filled with Trump appointees."

Eliason spells out why he believes that, while the DoJ doesn't usually comment on such cases, "this is a unique case" where "a lot of people are really convinced that the evidence of obstruction was pretty overwhelming" and that "it's bad for the Department and bad for the country if that just is allowed to fade into the distance and nobody ever says, 'Hey, we did take a look at this, and here's what we decided.'"

In fact, Eliason believes there is evidence to suggest that Garland is carefully looking at Trump's potential criminal exposure in regard to the January 6 insurrection at the U.S. Capitol, but is less certain about his handling of the Mueller allegations and thinks "there should be some closure on that.".

All of this, of course, as the clock may also be ticking toward an announcement by Trump that he plans to run for President again in 2024. How would that affect any potential federal indictments against the twice-impeached former President? We discuss that matter --- "practically speaking, that gets really hairy --- as well.

Finally, in our closing few minutes, a few more thoughts on Trump's worsening New York woes from someone else with a unique perspective. George Conway, the longtime Republican attorney and husband of Trump's former Campaign Manager and White House aide Kellyanne Conway, tells CNN why he believes the Mazars news to be far worse for Trump than his two impeachments as President...