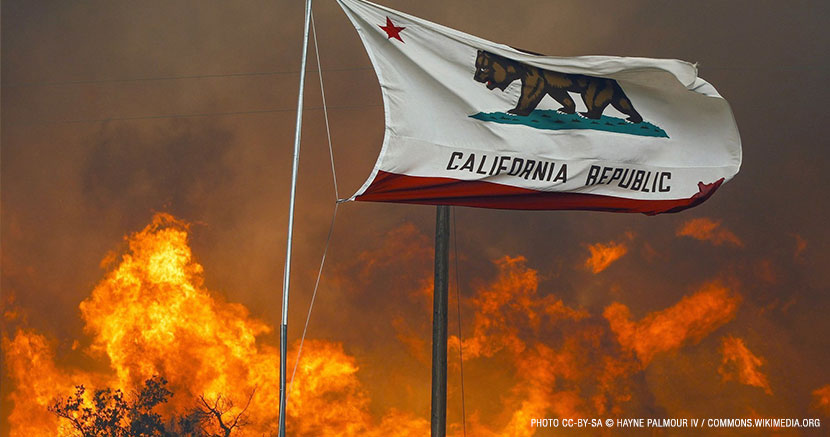 This is California at 1.1 degrees Celsius of temperature rise due to anthropogenic climate change: unprecedented Megafires; toxic air, and 121 degrees Fahrenheit in Woodland Hills - all in the past week.

Scientists say the best we can realistically hope for now is to contain global warming to 2 degrees...

Now, ask yourself: what are you going to do about it?

If you are not convinced now that humanity has to change course and get 100% off of fossil fuels as fast as possible - don't go blaming it on Donald Trump because you are part of the problem too.

Of course, of course, of course, Trump has to be defeated this fall.  His narcissism is so extreme that he clearly doesn't give a damn about anyone other than himself, let alone people of future generations and the state of the planet they will inherit.

But don't kid yourself about the moderate wing of the Democratic Party or any other branch of the American status quo. All evidence to date shows a complete willingness on their part to stay the same course: to keep on fracking, building pipelines, developing tar sands, and subsidizing the fossil fuel companies. They are in bed with Thanatos too. Come January we have to appeal to their reason - which they proudly proclaim their faith in - and demand they acknowledge their death drive, overcome it, and change course immediately. If they don't, we have to vote them out too ASAP

Just as important: don't give in to hopelessness. Rather, recognize that the population of the United States is uniquely positioned to do something to address this dire reality.

The majority of scientific research capacity (and scientific brain trust) in the world is located in the domestic United States.  Yes, it's something of a paradox: the American population itself is (on balance) mal-educated; but due to the spectacular infrastructure at American universities, the top research scientists in just about every field are concentrated in the United States.

What we need from them is the knowledge, and the development of new technologies, to achieve a 100% green energy revolution, as well as a revolution in carbon sequestration, and a revolution that fully clarifies (and thus can establish) best practices for sustainable land management.

All of that is necessary.

Here's the thing - it will most definitely not be achieved via the private sector. There is simply no way that private investors will pour the necessary billions into projects that are so unlikely to return a short term profit. Thus, it will require government investment.  That means the process will be political - and that means it's in the hands of the democratic polity of the United States.

It certainly makes for a nice morality tale. You either can do what you know you need to do, and build a mass movement to replenish and renew this heavenly planet - or you can burn in hell.

Hey, don't take my word for it. Check out this week's Beneath the Surface with Suzi Weissman on the KPFK.org audio archives. Suzi's three guests know a helluva lot more about this than I do: author Mike Davis; PHD candidate in Geography at UC Berkeley Melieza Figueroa; and Ali Meders-Knight, a member of the Mechoopda Indian Tribe of Chico Rancheria, and a TEK (Traditional Ecological Knowledge) practitioner.