Trump Gives Himself "A+" on Covid-19 Response as US Death Toll Hits Grim 200,000 Milestone 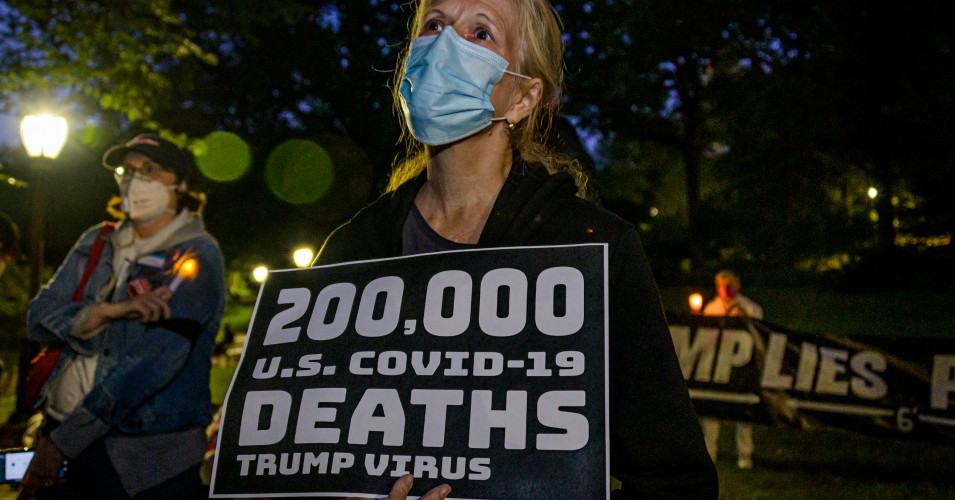 A participant holding a sign during a vigil on September 20, 2020 in Manhattan. (Photo: Erik McGregor/LightRocket via Getty Images)

As the U.S. Covid-19 death toll was all but certain to hit 200,000 on Monday with the virus still taking the lives of nearly 1,000 Americans each day, President Donald Trump told Fox News that he would give himself a perfect grade for his handling of a pandemic that has infected more than 6.8 million people across the country, permanently eliminated millions of jobs, and destroyed countless livelihoods.

"After President Trump's admission that he purposefully downplayed the virus to the public, it's clear that we have much more to learn about exactly how the government failed to protect the American people throughout this crisis."
—Kyle Herrig, Accountable.US"We're rounding the corner, with or without a vaccine," Trump claimed Monday morning, even as the virus continues to spread nationwide. "We've done a phenomenal job, not just a good job, a phenomenal job, other than public relations, but that's because I have fake news."

"On public relations I give myself a 'D.' On the job itself, we take an 'A+,'" added the president, who in March said he would consider a coronavirus death toll of "between 100,000 and 200,000" an indication that his administration did "a very good job."

Trump's effusive self-praise came hours after hundreds of activists led by family members of Covid-19 victims marched from Central Park to Trump Tower in New York City Sunday night to mourn the lives lost to the pandemic and protest the White House's failure to stop a preventable catastrophe.

"Trump and his cowardly enablers, they all have blood on their hands," said Martin Quinn, an activist who lost his father to the coronavirus. "I don't know how else to channel my pain but to pressure them and the rest of the country to do better."

Kyle Herrig, president of watchdog group Accountable.US, said in a statement marking the 200,000-death milestone that it was obvious from the beginning that "the Trump administration was mismanaging the nation's pandemic response."

"After President Trump's admission that he purposefully downplayed the virus to the public, it's clear that we have much more to learn about exactly how the government failed to protect the American people throughout this crisis," said Herrig. "As Covid-19 continues to rage, the Trump administration must ensure that tests are widely accessible, and that relief reaches the families that need it most." 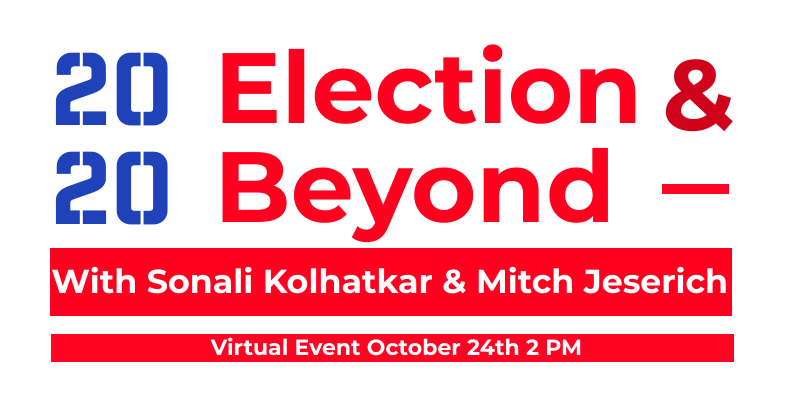 The U.S. approached the horrific coronavirus milestone days after the death of Supreme Court Justice Ruth Bader Ginsburg, which resulted in a vacancy that the Trump reelection campaign is already attempting to exploit in an effort to steer the national conversation away from the White House's handling of the pandemic with less than 45 days to go before November 3.

As The Daily Beast reported Monday, "Trump's latest messaging reset comes at a time when GOP operatives and prominent party allies are thrilled to divert attention from other major issues that have threatened to doom Republicans this November: mainly, the president's disastrous response to the coronavirus pandemic, and his equally hamfisted handling of widespread protests against racism in policing that have raged for months."

Robert Jeffress, a Dallas megachurch pastor and an informal faith adviser to Trump, said Sunday that "this court vacancy could not have come at a more opportune time."

"The coronavirus and the endless negative Trump books and allegations have become background noise between now and November 3," added Jeffress.

The campaign of Democratic presidential nominee Joe Biden, meanwhile, is seeking to prevent Trump from dodging accountability for his failed pandemic response by tying the "court vacancy to the health emergency gripping the country and the future of healthcare in America," the New York Times reported Sunday.

"While confirmation fights have long centered on hot-button cultural divides such as guns and especially abortion, the Biden campaign, at least at the start, plans to chiefly focus on protecting the Affordable Care Act and its popular guarantee of coverage for people with pre-existing conditions," according to the Times. "Biden will accuse the president, as he already has, of trying to eliminate protections for pre-existing conditions during a pandemic, aides said, with the stakes heightened by a Supreme Court now short one of the liberal justices who had previously voted to keep the law in place."

Last week, as the U.S. coronavirus death toll approached 200,000, Biden tweeted, "It didn't have to be this bad—but Donald Trump failed to do his job."