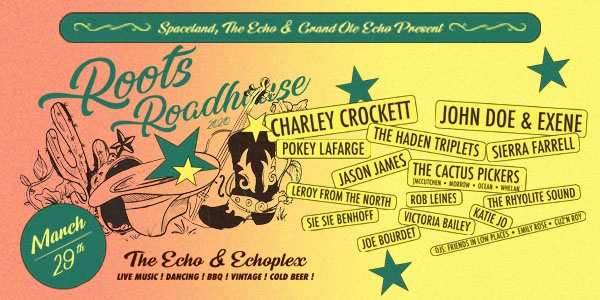 POSTPONED DUE TO COVID-19 CONCERNS. WE WILL UPDATE WHEN WE HAVE MORE INFORMATION

March 29th, 2020. Roots Roadhouse is an all day festival that takes place on the legendary Echo and Echoplex stages in addition to their patio stages. The festival’s programming is characteristically musically multifarious, blending elements of roots music including outlaw, country, roots rock, indie folk, blues and of course, the cosmic sounds of California country. The lineup incorporates the best of local roots music scene to national touring acts. In addition to the live performances there will be food trucks and an eclectic array of vendors along with country music DJs.

Some highlights of this year’s programming are below. Others will be announced at a later date.

The event runs from 4:00pm to 10:00pm on the following dates.
Select a date to add this event to your calendar app.